Campaign: The White Elves have unleashed a Chaos Golem to destroy the World Clock! The Magi of Time have slowed it down with their most powerful magical artifacts, but those are being consumed in the action. The Magi are desperate to find more artifacts or a permanent solution towards to destroying the dragon-golem and defeating the elves.

Homebase (Hex 0) (0100): Watch Tower of Kynze - The dwarf town of Kynze houses a Watch Tower - a small outpost of the Magi that connects to the dungeons of the World Clock. It has also become the default headquarters for the forces aligned against the White Elves, leading to an explosion of commerce and opportunity for those willing to engage in it. The surrounding farming towns and lands are filling with the tents of armies and forces, as well as attracting raids from the elves intent on disrupting the allies. 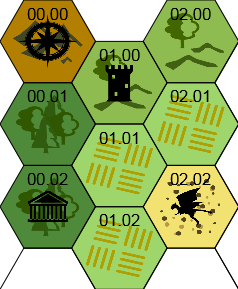 Location 1 (0000): The World Clock - The world-shaping magics of the World Clock have transformed it's location into a maze of mysterious dungeons, tunnels and caverns, filled with creatures, artifacts and odd pockets of reality that provide weal and woe to those who enter the clock. The Magi allow any and all to enter the clock in order to learn from their experiences and to help guide the realities and power to a balanced effect that preserves the order of the world. Their need for Lawful artifacts to counter the White Elves has resulted in a huge increase of dungeon-delvers, many of whom have perished fighting among each other in the depths.

Location 2 (0002): The Twelve Knights - The reclusive Twelve Knights are training a natural Resonator, a very rare human mutant who can enhance the effects of magics cast around him. The Magi are wanting to put the boy next to the dragon as a way of destroying the golem, but their plans are frustrated by how unpredictable he becomes around any sort of magics - whether good or evil. The Knights believe that the boy must witness the suffering of the lands destroyed by the Elves, in order to shape him towards their cause, and are close to sending him on a dangerous trip near the dragon.

Location 3 (0202): Dragon of Chaos - Desolation and destruction surrounds the golem and the White Elven army as they battle the attacking wedges of the Magi and humans who bear magical artifacts to wound the dragon. The weird tools, weapons and armors of the elves are highly sought after by rich nobles, but dangerous to obtain as each elven clan is protected by war wagons and strange creatures. Magi recruiters seek adventurers willing to make forays against the dragon or the elves to further slow down the creature.

MY APOLOGIES at missing the past couple of weeks! Work and conventions (Hello CincyCon!) filled up my time and I wasn't able to create these as I wanted. We return this week and will continue pushing on for my goal of 52 campaign starters!

"Three Hexes" are simple campaign starters to show that you don't need to do a lot to have interesting settings for people to play in. Feel free to use these in your game, campaign or as ways to spur on your own creativity and imagination!