Campaign: Probes sent to the system Beta Omega 8 discovered that the body orbiting the star was actually a Dyson Sphere, whose interior is a haphazard set of different terrains and features, but apparently uninhabited! An Imperial Science expedition has been dispatched to this system to explore the sphere and learn more about it and those that built it. Opportunities for wealth beyond measure have electrified the members of fleet, who are engaged in plots of political intrigue and a "gold-rush" approach to gaining the secrets of the sphere.

Homebase (Hex 0) (0102): ESS Scott - The medium class capital scout ship is docked to a large access hatch to the insides of the Dyson Sphere, manned by six guild companies and many independents. Captain-General Maximo wishes to gain control of the exploration fleet by finding valuable technology and is eager to gain any advantage over the guilds. Baron Nascimento believes a great evil lives within the sphere, based on his mage-astrologer-psychic and resists Maximo at every turn, secretly hiring independents to sabotage expeditions within. 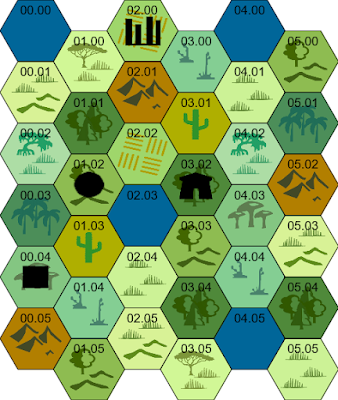 Location 1 (0302): Base Camp 003 - The camp is the site of a mysterious massacre of an entire company from the Steel Guild, who are now offering great rewards for independents to recover the dead and find out the cause of the loss. The site is in a great forest area, populated with silent robots tending the flora and fauna. A glowing ball of light was observed over the site before the massacre, according to recordings, but the only clue to its source is a strange small ruin at the center of the forest and surrounded by quiescent armored mechanical figures.

Location 2 (0200): The City - This area is so nicknamed for the collection of hundreds of impenetrable buildings found in this area. Robots and flying drones move about from building to building, somehow entering within them to perform unknown tasks or tending to parks and fountains of strangely colored liquids and plant-life. Psi-talented explorers who have entered The City have vivid nightmares of evil beings contained within the buildings.

Location 3 (0004): The Farm - Strange large mushrooms are growing here whose gills shed huge spores that seem to contain some sort of living creature. Huge tentacled robots collect the spores and take them to a central building that admits only the robots inside. The robots resist efforts to take the spores or enter the building, but the Verdant Guild is willing to pay a high price for the recovery of a spore or information on what is inside the building.