Campaign: Adventure awaits for those who travel to the Frozen Northlands to follow rumors of treasure, lost islands and challenges that promise glory for those that overcome them. There is no shortage of sages, nobles and adrenaline junkies who are hiring crew and mercenaries to travel to Skald-a-fun. There are forces at work, though, to end the incursions and send the outlanders back to where they came from.

Homebase (Hex 0) (0000): Skald-a-fun -  The cautious Jarl of Skald-a-fun is looking for additional protection for his town after recent attacks by the Ice Men of the North have whittled his forces down. The brash Lord Ivaross is looking for adventurers who are willing to accompany him to find his lost brother Nathaniel, who left on an adventure to find treasure. The wily townsfolk do a brisk business in providing ships, guides, information and a bazaar for selling supplies and artifacts, although the recent Ice Men attacks has dampened their spirits some and driven up costs. 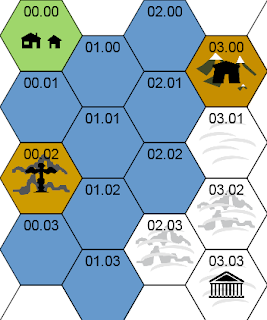 Location 1 (0002): Toothsomes' Lair - The rock filled waters around this island are home to fearsome Sea Monsters who have learned to attack the boats coming from the mainland - they bring lunch and dinner! Survivors of the Sea Monsters will run into the zealous worshipers of a forgotten evil god, who live in longboats and go to the island only for religious ceremonies. They will fight to the death to protect a fabulous treasure on the island - horrific totems of solid gold, encrusted with gems!

Location 2 (0300): Nathaniel's Camp - The lost brother is stranded and attempting to repair his broken airship before rocs with Ice Men riders return to attack! Nathaniel is eager to continue his journey to fly to the Lost Mountain Temple, and is willing to share the loot with any who help. The mountains are an easy way to lose the bandits, who fly up the coast, but the winds and ice storms are dangerous!

Location 3 (0303): The Lost Mountain Temple of Ice - The Ice Men of the North, mongrel men and shamans led by Guldi-aa, have gathered an army and are intent on destroying Skald-a-fun and casting out all outsiders to their lands! Their village lies between the mountain wall and the Temple - guarded by roc riders, archers with fire bows, and Greek Fire catapults. The temple itself, carved out of rock and ice, houses both a fearsome creature worshiped by the Ice Men and an artifact of magic!
The Island at the Top of the World! I had a picture book and (if I remember correctly) a 45 record that played bits from the movie. It captured my imagination at an early age and has fed my D&D preferences far more than I have realized. It's one of the reasons I'm looking forward to the streaming Disney service, so that I can watch it again! This campaign is definitely directly inspired by that movie.
"Three Hexes" are simple campaign starters to show that you don't need to do a lot to have interesting settings for people to play in. Feel free to use these in your game, campaign or as ways to spur on your own creativity and imagination!