Campaign: The King and Queen, spurred on by the royal fortune-teller's belief that their kidnapped children will die soon, have mustered their forces at the border, with orders to wage war on their neighbor! A few heroes and adventurers have been having vivid dreams of a young girl holding onto a baby boy and pleading for their rescue from "demons". Legend says that only the goblin choir can open the path to the demon lands, but they live hidden in the forests, fearful of human contact.

Homebase (Hex 0) (0200): Helmgen - Military camps and mercenary companies have flooded into this once-peaceful border town, preparing for the invasion. The local crazy hermit has been bothering any who would listen with warnings of dire peril coming from the mountains to the south, but has found disbelief wherever he goes. He's now scouring the pubs of adventurers and toughs, begging for protection against a dark stranger who he claims is following him, offering to pay for an escort to the capitol to find his estranged brother who can help. 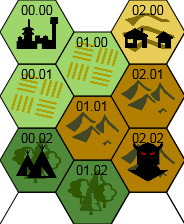 Location 1 (0000): Ilustra - The capitol is on lockdown, with entry through its gates severely restricted for official business only. The last sage, who is brother to Helmgen's mad hermit, knows the location of the old goblin tribes. He's been stricken with a strange affliction that can't be cured by magic or medicine.

Location 2 (0000): Darkanen Forest - This ancient forest is shunned by all except a few hunters and the odd bandit looking for a hideout, but it harbors the remnants of the last goblin tribe. The goblin choir of the tribe can marshal great arcane power, including the power to reveal the entry to the demon lands deep within the mountains. They use the power of the forest and its creatures to remain hidden, fearing that humans will return in warfare against them.

Location 3 (0000): Demon Lands - Demons are once again awakening in the deep tunnels of the mountains! The royal Vizier has set up a secret lair here and has hidden the royal children within; they are intended as a sacrifice in a foul bargain with the dark ones to awake their horrible Lord. The barbarians who live in the mountains have been forced to move away, and are looking for help to regain their lands back.


This campaign starter comes from a dream that my wife had almost 15 years ago, and it's one that I would love to turn into a children's story, if I knew how to write those kinds of things! I hope that this campaign starter helps someone to perhaps make it into a living story.
"Three Hexes" are simple campaign starters to show that you don't need to do a lot to have interesting settings for people to play in. Feel free to use these in your game, campaign or as ways to spur on your own creativity and imagination!