A sense of wonder and magic in AD&D

You might get the impression, if you hang out on reddit and Facebook AD&D groups, or on some of the AD&D focused forums, that there is no way but THE RULES AS WRITTEN AND THE HOLY WRIT OF GYGAX AMEN!!!!!

I can see the reaction now... 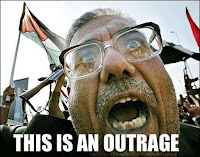 Yea, I've not been one for doing RAW or BtB so much. I mean, my houserules document is quite a few pages long (one of my new Discord players was quite gleeful about that... funny!) and I've long said that my "version" of D&D is called "D&D".

To me, the rules are a starting point. A common starting point so that we're talking the same language, but just as I want a world to explore, I want to explore the ruleset as well. I want to push it, expand it, contract it, simplify, but then find new ways of expression in letting imaginations run wild.

One of my best players for that is someone that you'd not expect, but he's provided more opportunities for me than anyone else. He does things and asks questions that provoke me to explore the rules beyond what I may envision, and that's a good thing!

For me, the rules provide the way to experience the world of myth, magic and wonder - and that implies that the rules are going to be broken, remolded and remade! It's the world of the Hobbit ... where you think you know what's going to happen, but then there's that ring that just manages to break the rules.

I want that sense in my game.

So what prompted this soap box? The use of find familiar.

In my world, I run wargames as well as RPGs. One of the miniatures that I have in my collection that I use quite a bit in Chaos Wars is a winged panther. I almost always start this guy off close to the mage(s) that are also in my wargames... but why? It occurred to me that perhaps these panthers are preferred familiars in my world! How would that work, given that the spell that AD&D has produces results like this: 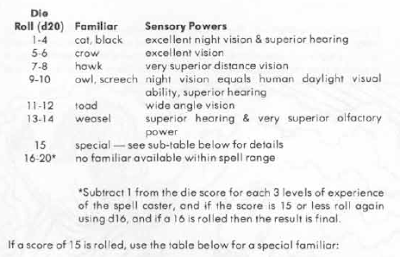 So while I could easily adapt/adopt this table and plug in creatures from my setting, something else tugged at me.

Imagine a magic user who wants to connect with a beast as a familiar. It's more likely they'll have a youngling, or an animal already present. The spell, as written, summons something from the ether.

So this then makes me think that this spell should be more of a framework. And that kind of gets to how I tend to see spells... as frameworks or commonalities of how mages approach what they do. Sure, everyone has a sleep spell, but Wizard Frizzat may have worked out how to sleep creatures, but Magetrix Yeena may have done it slightly different. Those expressions of spells in the books are how the mages themselves interpret the twisting of these awesome energies to do what the caster wants. The formulae are more art than science.

So for me, having the mage's intent and desire be as much of a driving force for how the spell works, as the RAW itself. So, for find familiar, I told the player that they could focus the energies and magicks towards binding an existing creature that they'd already befriended. The roll was still a d20, and if they'd rolled the 16-20 result, it meant that their initial attempts were unsuccessful... try again in ten days. He rolled a 3, and it worked brilliantly. Now he has a young winged panther bound to him as his familiar.

I'm sure that a great many DMs already do this flexing, but I also get the feeling that a lot don't OR that those new to D&D and perhaps OSR/AD&D may think that there's no room for flexibility, of there has to be a new spell or new mechanic or new RULE to make things work.

I say, let your imagination make it work. See the rules, spells and mechanics as tools to get to the effect you want - let the rules promote wonder, magic and little mysteriousness, versus a lockstep "ve must march zis vay!" parade.