Campaign: Solid clouds covered in vegetation and vast skies are what make Zantra a unique world, home to the Windlord species! Zantrans sport a mix of avian and human features, as well as a definite zest for combat and war. The tiny surface of Zantra is below the thickest clouds and the Zantrans see it as nothing of consequence; not knowing of the rich treasure in the ruins upon it!

Homebase (Hex 0) (0001): Skylords' Aerie - This sky island is home to one of the larger Aeries of the Skylords. The town is familiar and rowdy, with many taverns and places of ill-repute serving the rambunctious inhabitants and travelers. The towers and trees that support the open-roof buildings are sturdy and bohemian in nature, with banners and decorations forming a kaleidoscope of colors. 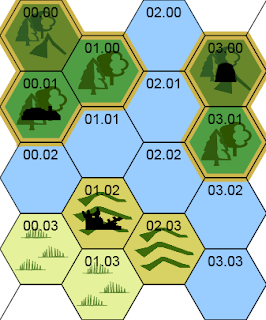 Location 1 (0000): Drudia Mountains - The forests that blanket the flanks of these steep mountains are tended by druids of the Skylords. Each grove is a work of art and zealously maintained by the druids assigned to it. Festivals are frequent and full of physical games and an enormous amount of food and drink.

Location 2 (0102): Forgotten Ruins - The remains of columns, walls and mosaic-covered floors lie on the gentle hills of this ground surface location. Ignored by the Skylords, they are home to fey creatures - fairies, dryads, nymphs and the like. The clues found in these ruins and the guarded treasures within tell the story of the origin of the Skylords.

Location 3 (0300): Calistos Caves - A dark sky island that rains water and rock on the surface, it also contains a maze of caves within. The Skylords will use these caves as tests of strength and skill, daring to face the great horned bull-beasts within that hoard their riches within. Calistos is the near immortal bull-king who rules from deep within the island, daring the Skylords to face him in single combat; none have survived the mazes to find him and accept the challenge!


See here for the overall campaign starter for New Worlds, a larger campaign framework that asks "What if your fantasy world was on the bring of ecological failure, and you had to leave it?" I have three worlds to explore in these campaign starters, but they can also stand alone.
This week's post is inspired by this tweet from the Cartographer's Guild.
Every week, I will be posting "Three Hexes" - simple campaign starters to show that you don't need to do a lot to have interesting settings for people to play in. Feel free to use these in your game, campaign or as ways to spur on your own creativity and imagination!