Campaign: This world of ice and snow is populated by an enigmatic species that resemble a cross between elves and Zantrans, with a vastly different civilization. They abhor anything that bring chaos and disorder to their lives, which are spent in religious, philosophical or scientific study. The 98,512 inhabitants of this world keep their population in strict order and base their lives on sustaining that exact number at all times.

Homebase (Hex 0) (01.01): Shuxon City - The city is built in a perfect circle, with each citizen allocated a specific amount of space to live and work in. The bureaucratic society manages all aspects of life and interactions with others by a set of rules, as well as with the help of strange constructs that are maintained by other constructs. The many libraries, laboratories and debate halls are constantly filled with Shuxonese engaged in intellectual pursuits; the goal to be to have their ideas records in the Official Records hall which is built in a series of underground structures that extend deep below the frozen surface. 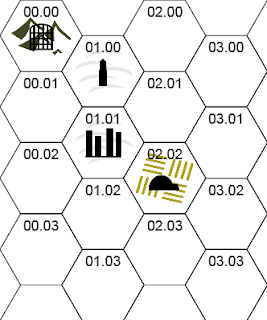 Location 1 (00.00): The Pit - The waste that the Shuxonese generate is brought to the Pit by constructs to be either recycled or disposed of. The ice kobolds live in the maze of tunnels, chambers and deep holes, recycling the things that the Shuxonese need and keeping the rest to serve as their materials to build and live with. Happy with this arrangement, the kobolds have slowly built a fantastic city beneath the mountains, keeping it a secret for fear that the Shuxonese would become jealous and take it for themselves.

Location 2 (01.00): Obelisk of Mystery - Made of black stone and rising 320 feet above the ground, this massive obelisk has a single entry point fitted perfectly within its east side. The Shuxons have no records of this object nor are they able to enter it or discern its purpose; as a result, the proposal to ignore its existence was approved 932 cycles ago. Those attuned to particular arcane abilities will feel an intense pain the closer they get to the obelisk.

Location 3 (02.02): The Fields - A series of ice domes built across ground that is suitable for raising  the algae that the Shuxonese eat. The noisome dwarfs that tend to the farms are at home in the less than clean environment, managed by sullen Shuxons who have been assigned to the duty as punishment. It is only the many constructs that watch constantly keeping the quarrelsome dwarfs in line, although the Shuxonese do allow a down cycle for celebration and 'release of pent up emotions through drinking and undignified behaviors.'


See here for the overall campaign starter for New Worlds, a larger campaign framework that asks "What if your fantasy world was on the bring of ecological failure, and you had to leave it?" I have three worlds to explore in these campaign starters, but they can also stand alone.
Every week, I will be posting "Three Hexes" - simple campaign starters to show that you don't need to do a lot to have interesting settings for people to play in. Feel free to use these in your game, campaign or as ways to spur on your own creativity and imagination!