Campaign: A surprise awaits those who travel to the harsh, wind and dust blasted world of Tantek; it is the racial home of orcs! Dragons prowl the sky on Tantek while wily goblins and crafty kobolds compete with the orc tribes for resources and water. The forbidden city ruins on the shore of the Dusty Sea may hold clues to Tantek's past, and possibly to Veyun's future.

Homebase (Hex 0) (0101): Ra-nam-ish-kra Tribe - Ra-nam orcs call themselves the "First Tribe" and as such, are both the largest and conservative of the Twenty Three. They guard the approaches to the Forbidden City and serve as what would be the ruling warrior class of orc civilization. The tribal grounds are a meeting place, trading center, technology research facility and administration complex, culminating in The Hill, which is where the current High Shaman and King of Orcs lives. 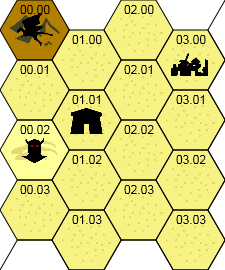 Location 1 (0000): Dragon's Lair - The fierce dragons of Tantek make their lairs high in the mountains across the planet, and this fearsome red dragon lives deep within the tallest mountain. Tograd has lived for perhaps millennia and claims to know the secret of the orcs and why they migrated from Tantek, but the dragon will only talk to mages of advanced skills, and usually in an attempt to rob them of treasure and life. Several of its brood live close by as guards, but only till they reach a certain age at which point Tograd either drives them off or eats them.

Location 2 (0002): Bloody Dunes - The dunes are homes to the Sandinuri goblins, waging raids and guerrilla combat against the Ra-nam orcs and the desert kobolds, when they're not busy killing each other. The poisons and missile weapons of the goblins are the best on Tantek, so a limited form of trade happens if the goblins are plied with enough food and fermented drink to quell their normally vicious tempers. The lairs of the various goblins are former hives of the dreaded sand spiders or giant ants, which also prey on the unlucky traveler braving the dunes.

Location 3 (0300): The Forbidden City - Set on a mesa that juts out of the endless sand, the bones of crumbled towers and broken walls of this abandoned city jut into the sky. Encampments of orc guardians ring the mesa to prevent any and all from scaling the sheer cliffs to the enigmatic ruins and regular patrols deal with both animals, goblins, kobolds and heretical orcs driven to attempt to plunder the rumored riches of the city. Once a year, all orc tribes gather in peace around the mesa for a single day of silence, fasting and praying, though only the highest shamans know why this is.


See here for the overall campaign starter for New Worlds, a larger campaign framework that asks "What if your fantasy world was on the bring of ecological failure, and you had to leave it?" I have three worlds to explore in these campaign starters, but they can also stand alone.
Every week, I will be posting "Three Hexes" - simple campaign starters to show that you don't need to do a lot to have interesting settings for people to play in. Feel free to use these in your game, campaign or as ways to spur on your own creativity and imagination!