"It is a wondrous sight, to see the golden towers of Shallam gleaming in the evening light, reflected in the waters of the bay." Cal Thinean, poet of King Elthest IV. 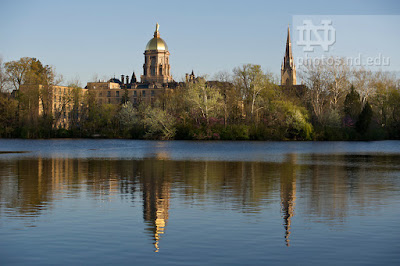 The beautiful city of Shallam has long served as a gateway to the Duchy of Corridin, sitting on the main river as it empties out into the Bay of Shallam leading to the West Seas and Ocean of Ices. Gorgeous architecture and lush gardens have made this city the equal of Irecia, the "City of Diamonds." Throughout the 60 years of the Doom, it has served as a shining reminder of a better time.

It is also going to be the target of a large scale attack at my GaryCon game - The Desperate Defense of Shallam. (Yes, this is a shameless plug to come play my game(s)!) And to that end, the attack on a city requires a nice terrain piece of city walls and gates to make the game table complete.

I've recently (re)discovered the pure joy of putting together Hirst Arts projects as I've already created one piece for my other GaryCon wargame - The Battle of Tuluk Ruins. (another shameless plug!) Here's two pictures of that piece - WIP. It's finished now, I've just not had the time to set up a nice photo spot to take pictures of it.

That piece was ordered from Drakenstone - very nice folks and easy to deal with.

For the gates of Shallam, I had a picture in my head of something really cool, but it wasn't until I saw this picture on Pinterest that it crystalized. 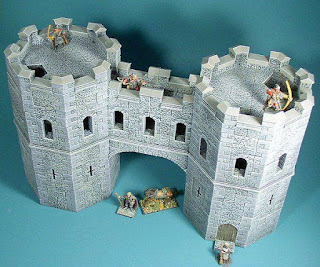 But the octagonal towers didn't fit the image of long slender spires and golden domes. So I went back through the Hirst Arts site and found the turret mold and turret towers. Now, how to make the gate? I saw the travelers bridge on the same site and an idea was formed... 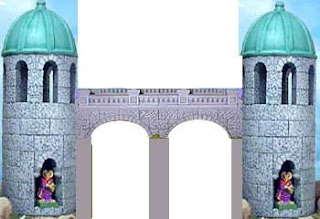 But in my head, the walls/battlements are about 40 feet high - about 7" in 25mm scale. So I need to make the turret towers taller, about 9 to 10" instead of 7" for this to work like I've pictured above. That's just adding more layers/blocks in between the lower door and upper area. I'd also have to figure out a way of connecting the bridge/battlements to the towers. Fortunately, I've found the Facebook Hirst Arts groups and G+ Hirst Arts groups and got some great advice.

I'm almost complete with the build, so here's the WIP so far.

The start of the bottom of the turret towers, following the plan (mostly) from Hirst Arts site. The other pieces are for small ruins to be scattered across the battlefield. 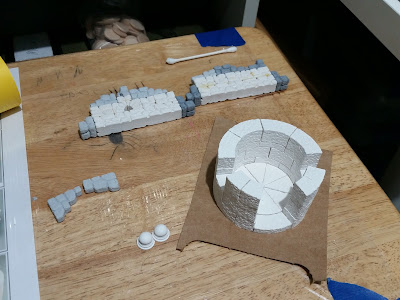 Starting on the battlements/gates frame. The Travelers Bridge is normally about 4" across (including the side rails) and the diameter of the turret tower is only 3". So I went with a 1" width - a slight modification of the plans. I also left out the slope of the bridge. On each end is a longer piece that sticks out - a "tab" so that it can fit onto the tower and have a solid connection point. 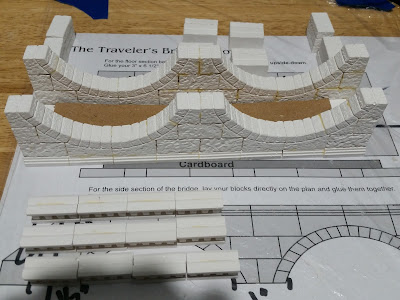 I'm building up the middle of the tower, making it higher. At a certain point, I needed to put "tabs" into the tower sticking out, so the bridge could sit on them. This makes two points of contact on each tower, giving it stability and security. 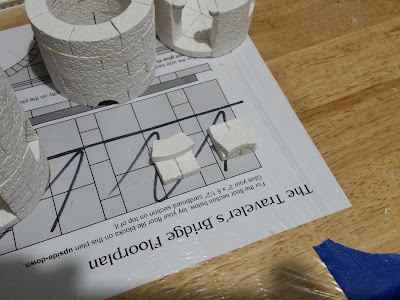 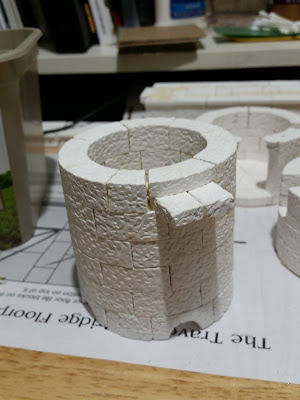 So that it fits like this! The bridge sits on the tower tabs. On the upper floor of the tower, there's an open area where the bridge tabs sit on. This also looks like stairs leading up to the bridge. I've been recommended using Gorilla Glue when I get to that point, and I'll give it a try. 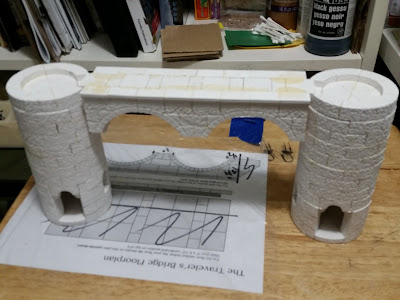 Here's another look at all the tower pieces - the bottom (which is left unattached so I can paint the inside!), the middle section of the tower with the tabs, and the top floor, showing the cutout area for the bridge to rest on. 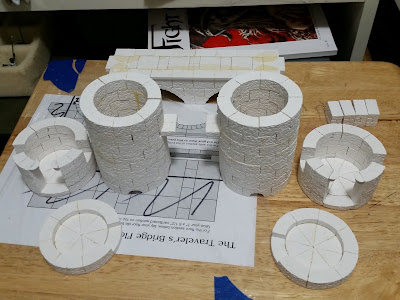 Here's the WIP showing what the towers will look like with the bridge attached. This is a dry fit right now, I still need to put sides on the battlements and then paint the individual pieces. This is the view from the city side. 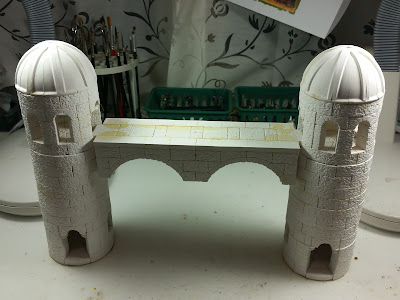 Here's the view from the "outside" side. 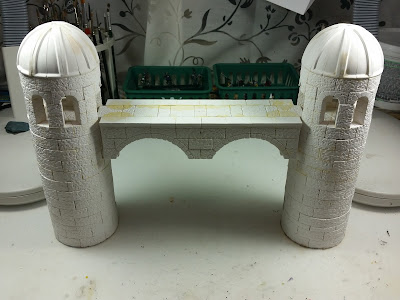 And the tops of the towers come off! I can put figures in there, or if I want, interchange the domes. Perhaps I'll get more of the dome pieces and make red dome tops, or green or ... ? 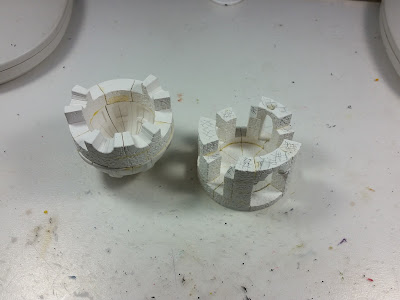 There's a lot of work to be done. I have to make the support walls that project down from the battlements to attach the gates to, then shape blocks so that there's a solid connection between the support walls and towers. *THEN* I have to make the actual gates, and paint everything up, THEN assemble the whole thing. After that, make some wall sections - but those will be out of pink foam. I can't afford that much Hirst Arts blocks and I don't have the time to cast my own.

Speaking of which, how did I get the Hirst Arts blocks? Knowing that I had limited time, a ton of minis to paint while I'm doing all this, I went ahead and purchased the blocks from someone. In this case, I used CastleKits.com - Iain has been wonderful to work with. Just like Andy from Drakenstone. I highly recommend both of these guys.

Knowing how much I enjoy Hirst Arts, I will be buying my own molds and casting my own... but when I have a bit of time and breathing room! Eight weeks to GaryCon - I've got some work to do.

So what do you think? What would you have done differently? And who wants to come play some Chaos Wars in attacking or defending these gates? :)
Labels: DIY Hirst Arts miniatures