I started this series to explore the updated release of "Chaos Wars", a set of miniatures wargaming rules by Ral Partha. In Part 4, we added terrain and Characters/Leaders to the mix. The leaders killed each other in a duel, and morale ruled the day as the Orcs overran the Human defenders!

In this post, we're going to add more special miniatures and rules to the table, with "Fantasy Troop Types" and "Creatures"!

These are simply the rules about abilities, bonuses and penalties that different fantasy races get. An example of what this looks like: 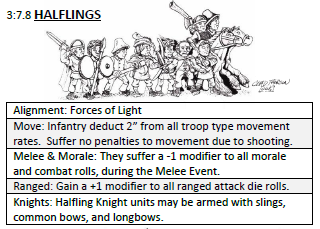 There are 16 different races that get special rules, including humans. This does raise the "fiddly bits" bar higher, requiring that you now add bonuses/penalties to any number of situations. That requires additional tracking of these bonuses/penalties, which I tend to put on order of battle unit sheets.

I also think that these can be fiddled with to suit one's campaign, although I would then look at the troop/fantasy point values of the race to see how the changes might affect balance. For my campaign, for example, here's how I might change the "Orcs/Goblyns" type:

This reflects how Orcs and Goblyns act in my campaign. I might put Orcs in the Human (or even Elven) category for troop points cost.

One big thing about Creatures is morale failure. Unlike Characters, Creatures do a morale check when they suffer hits. If they fail, Creatures do not just simply rout... they can pout, flee or go beserk!

So this could end up happening...


Let's see how this works in combat

We've bumped this up a bit to include two Rank 4 commanders and a Creature for each side.

We'll set up our scenario approximately the same as before. Humans protect the village against a Bestial raid. If the orcs occupy the building or reduce it to ruins, they win. Humans win by preventing that from happening.

In this case, one of the human village hunters made a friend of a monstrous rock lizard, who has become protective and friendly to the village. The orcs... well... they have a troll.

The Forces of Weal and Woe assembled for battle. 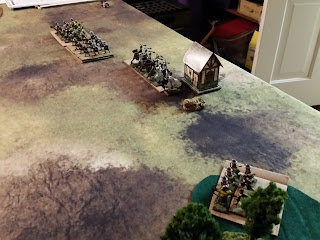 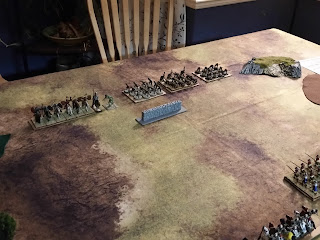 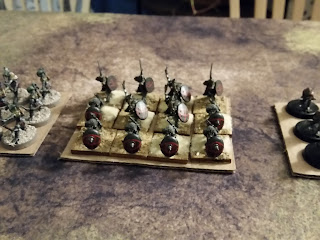 I have less than a 4' wide table, about 3.5', so with movement, generally things get started in turn 2. This game was no different as the orc foot, on the right flank, charged at the opposing human foot. The cavalry charged each other at the middle while archers took pot shots at available targets. The troll lumbered off to attack the archers while the rock lizard flanked the orc warriors. 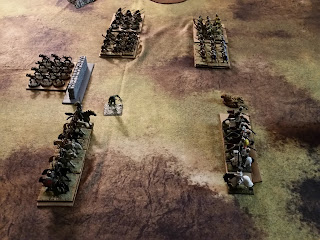 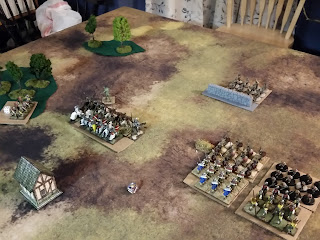 With the rock lizard attacking a troop, their attacks are a bit different, similar to characters. They roll x number of d6s, where x = their melee or ranged prowess. If the roll is 5 or 6, it's a "hit" - either a figure is removed, or an opposing character/creature loses a point of vitality.

The Rock Lizard scored two hits on the orc warriors, forcing a morale check which they failed! But... so did the human spearmen. 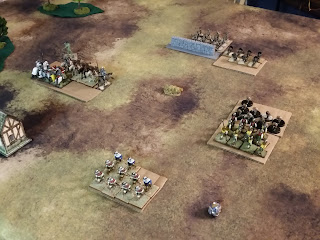 I didn't rally the units, as the leaders were both going to detach from their cavalry units and attempt to auto-rally the routed warriors.  Meanwhile, the archers moved away from the Troll and towards the building, to get extra protection. They weren't fast enough and the Troll was upon them, scoring four hits and routing the archers!

The cavalry traded blows but maintained their spirit. Then both the human men-at-arms and the goblyn warriors routed after trading blows! The situation did not look good for the humans, with three units routed. Both leaders sprinted towards their shaken units to rally them. 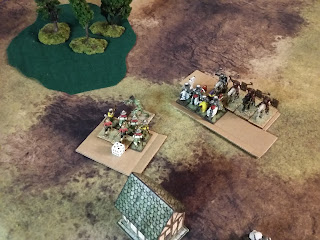 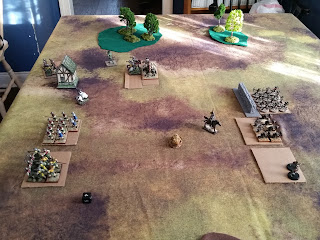 Turn 4 ended up being the important turn for the battle. The orc and human leaders reached their units, waiting for the rally event. The Rock Lizard, seeing an opportunity, attacked the Orc Leader. It took two hits, but with a melee prowess of 8 (meaning I throw 8d6), it scored 5 hits and killed the Orc Leader! The lizard failed it's morale check, but it simply ran away and waited.

Meanwhile, the troll ravaged the remaining human cavalry from the rear and wiped them out! 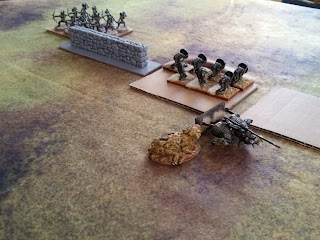 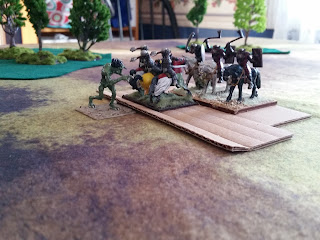 The human leader rallied his spearmen, who turned an immediately engaged the remaining orc cavalry. He then turned to rally the archers. But the Troll decided to attempt to destroy the building and give the Bestials a victory! 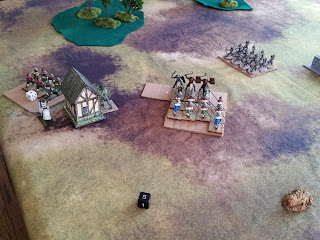 The human leader was having none of that. The next turn, he challenged the Troll to personal combat. Scoring 5 hits, he killed the Troll dead, being sure to burn it's remains. 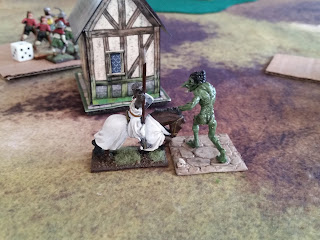 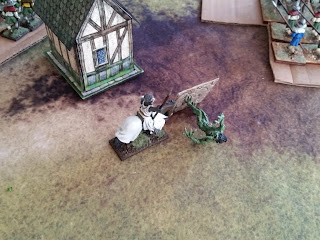 That same turn, the human spearmen forced the orc cavalry into a rout. At this point, the Bestials had no choice but to try to rally without leaders. This is a risky proposition, as if they fail, the unit dissolves. Two of the three Bestial units failed! The Orc cavalry was saved with the special fantasy troop rule I outlined above: Orcs gain a +1 on a leaderless rally checks. They needed a 4 and rolled a 3. However, with that rule, they were able to remain on the board.

That left the orcs with only 2 units, a Goblyn peasant archer unit and a very depleted cavalry unit. The humans had all of their units available, and the leader was heading towards the remaining routed creature and men-at-arms to get them back into the fight. The Bestials saw a lost cause and melted away back into the forests... the Humans won the day! 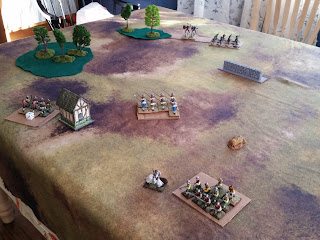 In most Chaos Wars scenarios that I've seen, or in the same armies in the rules, there are many more leader/characters. When I get to that point, more leaders will make this a different game. Being able to auto-rally is huge, especially that units can rout after only one hit. With this game that I played, the loss of the only orc leader who could rally was huge. That forced me to do leaderless-rallies on three units, and that was the clincher of the human victory.

Creatures can be quite a wild card! Here, the troll wreaked havoc, forcing the archers to rout and destroying the human cavalry. It look the human army commander to put him down, which forced him to stop rallying other troops. Had the orcs been in a different position, this might have been a huge choice.

I had some questions came up that I either answered, made rules, or need to get clarification on.

1. When a character/creature gets hit, it affects their vitality. For each quarter of their vitality lost, they lose  a point of prowess for melee, range and magic. In the battle of the Rock Lizard vs. the Orc Commander, this proved to be an issue! Here's why:

Orc Commander has initiative, goes first. He causes 2 points of damage on the Rock Lizard, which causes its vitality to go from 6 to 4, which would cause his melee prowess to go from 8 to 7.

Now, the Rock Lizard goes. My question was, do I roll 8 dice or 7 dice? It ends this was a major decision, because it was the 8th dice that ended up killing the Orc Leader!

As it turns out, in several places, the rules talk about combat results being simultaneous, therefore, casualties are taken after all combat is over. So, in this case, the Rock Lizard had a Melee Prowess of 8, thereby killing the Orc Leader.

2. Is attacking a building considered a melee? It mattered because the Troll was attacking the building and the Human Leader wanted to challenge it. You can't issue a challenge to a creature/character in melee. I ruled that the troll was not in melee --  a building really isn't fighting back!

3. Can a unit rout off the table? If so, is it lost? If not, does it stop at the edge? There is nothing in the rules (that I could find) and I could go either way on this. I will be asking in the Ral Partha forums and I'll let you know what I find out.

1. I cut up some old cardboard and made el-cheapo movement trays. Why did I not do this earlier?! It simplified things So Much!!!!

2. The "ground terrain" is a 4x6 printed cloth mat from Cigar Box Battle Store. I love this cloth! It's a nice heavy cloth, and the print makes the terrain look great! I am using the "Mixed Ground" mat. Highly recommend!

Next is Magic! We'll add Event 2 - Spell Casting to our turn and look at how spells can get used. That should throw in even more wild cards!
Labels: Chaos Wars wargames