In my attempts to making my Dark Ages campaign work like Tony Bath's Hyborea campaign, I've ran into a small problem to solve... how do I track all the armies that are marching all over the place?

My campaign world is huge. 20 mile (1 day travel by horse) hex size, and the land is roughly 200 hexes across and 100-odd hexes high. That makes it tough to print out a big enough hex map, mount it to corkboard and pin counters to it. Which was my totally awesome plan until I figured out the cost of that and custom counters. And the lack of space to mount such a beast in my small house. So... off to Plan B.

I've been using online cloud services like Google Docs and Obsidian Portal for much of my campaign resources with great success.... but I had no idea what to use to try and wage a wargame with an online map board, until I came up with this: 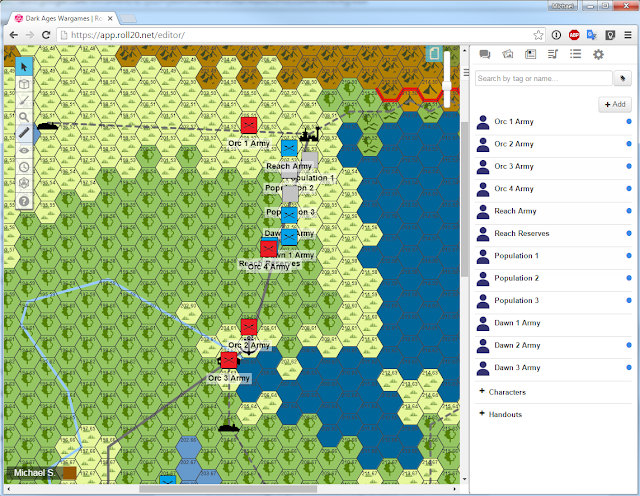 What are you looking at? It's the Duchy of Dawn, which is currently almost completely overrun by Orcs. What is unfolding is the last gasp defense as the humans make their escape from the city of Reach to the city of Ancturin.

It's being done in Roll20, the online virtual gaming table service. I've long resisted VTTs, but recent use in my online Dark Ages game has convinced me that there are uses for it... and this use of it - to be my cloud-based "board/map tracker" - is really nice.

Roll20 allows me to import my duchy maps (the land is divided into 7 duchies, the Central Kingdom and 4 demi-human states) as backgrounds to the Roll20 map. I've created some small counter "tokens" (the red, grey and blue squares) and some "characters" which give me the stats on the army figure, or any additional information. So now I can visually track what is going on.

I'll have to do this for all the sub-maps of my kingdom, but I think this is an elegant solution and gives me exactly what I need.

The hex map was created with Hexographer, which I've cheerfully and vocally supported since I heard about it in 2009. Joe put out a great program with Hexographer.
Labels: Chronicles of Etinerra campaign dark ages campaign idea wargames