My PCs are becoming shakers and movers in my campaign these days, with helping take back lost areas, clearing out ruined monasteries of Chaos and now having performed a rescue operation in the middle of Orc-held territory. It's been quite a set of adventures for this bunch and when the dice keep rolling their way, I just go with it.

The scenario - an important knight of the Duchy is holed up in a keep with sixty or so capable men, twenty injured and surrounded by a couple of companies of orcs (200 soldiers.) The PCs have come to trust this knight - Sir Ynivax - and hearing that he was likely to die in this situation got their attention and desire for action.

A scouting trip last game set up a pretty desperate plan. The Marshall (Lord in charge of the nearest town) would send one hundred cavalry to distract and protect the entrapped soldiers while they fled the keep. The idea would be the cavalry would carry off the men a short distance away where they would regroup. After that, the intent was to get them to a safe place, where they could regroup and refit for further duty.

It would be bloody, though, with 200 opposing orcs, some mounted, some not, alongside of orc chieftains and then there was this dude....

He's a mountain ogre, tosses rocks like a hill giant but has a much nastier disposition. Much. Nastier. During the scouting expedition, the PCs did everything they could to stay away from it.

So... the plan was set, the PCs and Marshall's men (commanded by the sturdy Captain Pellin) got into position and then sent the thieves on their way to sneak to the keep and give the word (plus bring healing potions for the twenty injured to turn them into effective fighting units.) 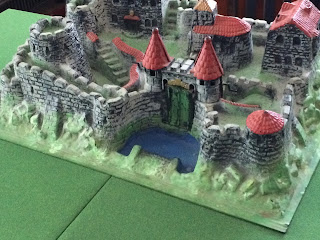 That's when the dice started telling the story.

First, one of the thieve's not only didn't hide in shadows or move silently, but the two orcs near him saw him outlined in the starshine. "HEY WHO GO DERE!?!"

The other two thieves pressed on, climbing the keep walls and and alerting the archers on top to what was going on. The archers, used to picking off orcs from the wall top, fired several flaming arrows at the orcs threatening the clumsy thief, but they ran from the missile fire.

The other story the dice told was in the set up of my forces. I opted for a random set up of the enemy forces, to keep my own bias from perhaps setting up a Kobayashi Maru-like scenario. What the dice did was separate the cavalry badly, as well as shove the powerful chieftain/ogre figure (represented by the ogre to the far right) against the edge of the board.

The players pounced on the opportunities this scenario presented. They had decided to light fires in several places to confuse the orcs and provide some lighting for the humans. With that in mind, the battle began.

I did some things different with this incarnation of using Book of War mass combat integrated with my D&D game:

So the mass combat started and the players realized that the fearsome mountain ogre was now part of a figure, rather than an individual ass-kicker.

The players started their fires and then sent forces to tie up the right side with the orc chieftain and cavalry, while the besieged troops escaped the keep. This worked out well, as the orc chieftain (through a reaction roll) ordered the troops to come to his aid and defense. 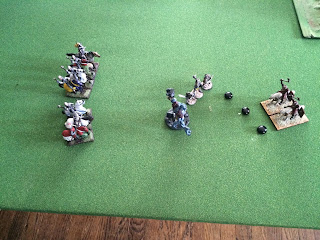 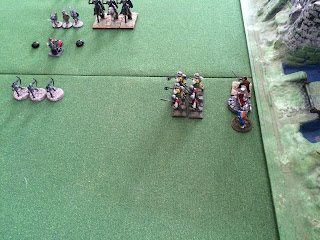 The cavalry to the center charged straight down the road towards the Keep, to clear the way for the escaping troops and PCs who were in the middle of the battle. Some fierce volleys of arrows were fired at the orc cavalry from the right, who were charging hard! And then... 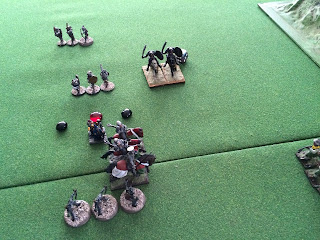 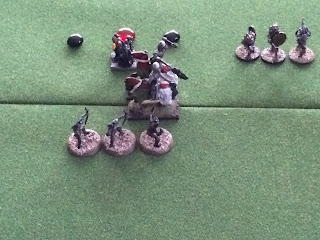 ... the tide of battle changed on morale! One of the rules of Book of War is that when a unit has suffered losses, they must roll 2d6. Add in the unit's HD and then something called "rate of loss" - where you take the number of figures in a unit left and divide it by the number of figures lost. If the number is 10 or more, the unit stays in the fight.

Far easier than the poor 3 figure unit of cavalry which lost a figure to missile fire. 2/1 = Rate of Loss of 2. Now I have to roll a 6 or better. The odds start to get a bit worse.

And... in this case, the orc cavalry charging towards the fleeing soldiers took a loss... and routed.

It happened several more times, to where the smaller units took losses and routed fairly quickly. The humans lost their central cavalry unit, but the orc resistance had mostly crumbled. The orc chieftain called for a withdrawal and regroup, allowing the humans time to escape and win! 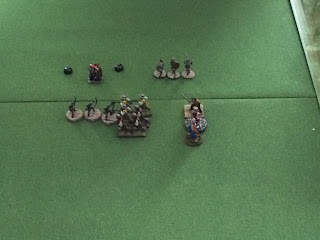 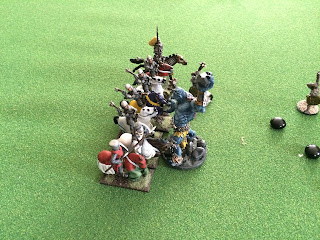 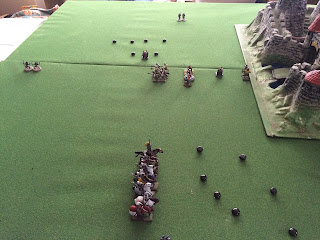 The PCs did take a hit from missile fire, but as they had enough HD to warrant a Hit of 2, they survived.

The battle was over in under an hour. The resulting pursuit and feint and successful escape took about another hour and the game was over!

With the loss of only one cavalry unit, this battle went from being a bloody mess to a rout of the orc forces. It was a great morale builder for the beleaguered forces of  Enonia and the Duchy. It was also a lot of fun for the players, by being involved in a simple, quick and fun mass combat game that felt seamless to the whole D&D game experience. 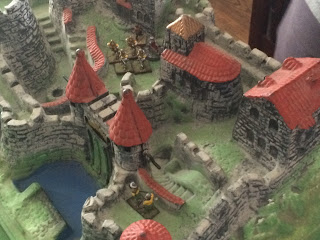 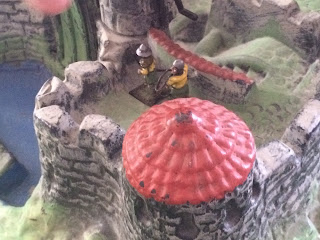 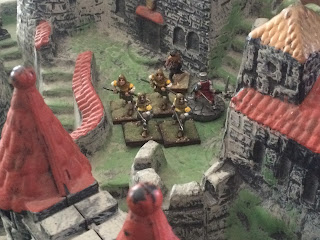 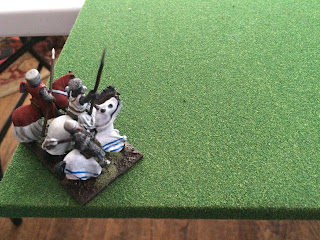 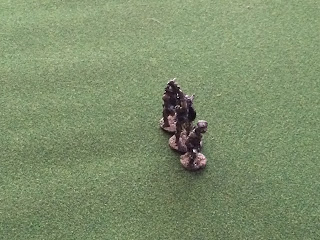 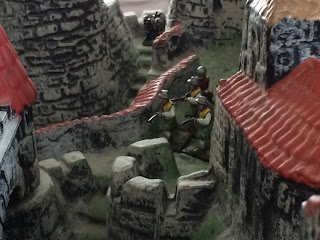 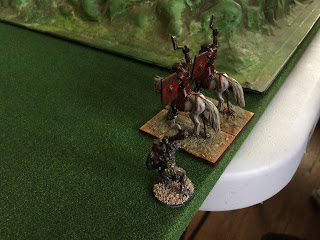 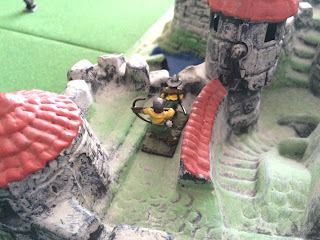 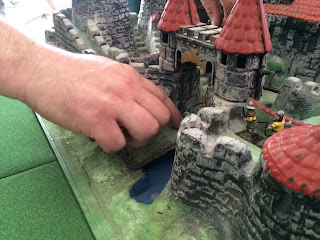 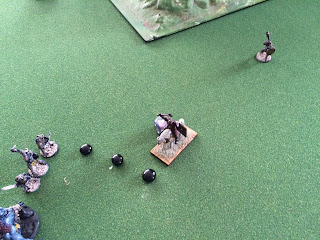 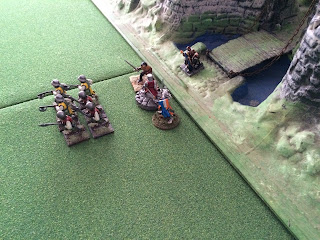 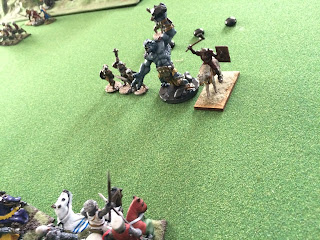 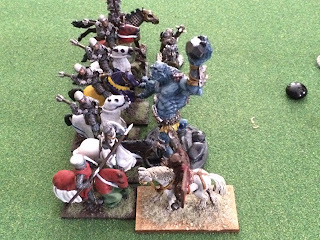 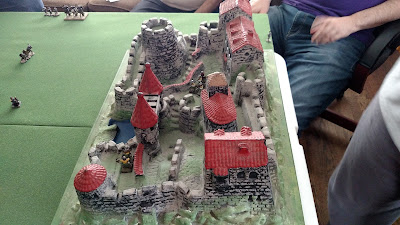 Pictures from my players - Richard Iori and Chris - all rights reserved to them, used with permission.
Labels: Book of War Chronicles of Etinerra campaign D&D dark ages campaign miniatures wargames