Creativity begets creativity and I'm on a roll with my campaign maps. I've finally completed the map for the players to use for my D&D campaign.

What is nice about doing it this way is that I can still do my Just-In-Time sandboxing with even this map. The players have the rough layout of the land and the political entities, plus the largest cities... and that's it! Enough to whet the appetite, to get the general jist and enough for me to flesh out general ideas and concepts, but I don't have to have each village or town defined. Yet!

Even so, I have more than enough to start working on new wiki entries. Thoughts that have jelled into concepts:
- How is a King or Queen selected by the various nobles or what are the rules of succession?
- Why does the Southron Duchy have a different name than the other Duchies? (instead of "Duchy of ...")
- Why is the Duchy of Elthrest the largest? Why is the Duchy of Pisces the smallest?
- Where did the missing Dwarfs go?
- Which area of the Lands of Men has lost the most to the Doom and Bestials?
- Why did the elves only settle on the north and southern coasts?

I can start figuring out each Duchy now, what it is known for, who is in charge, what its history is, what its armies look like. And odd little bits too... like why King's Hill is named that way, and what this might mean for the players.

More to come... just from finally having made the damn map! 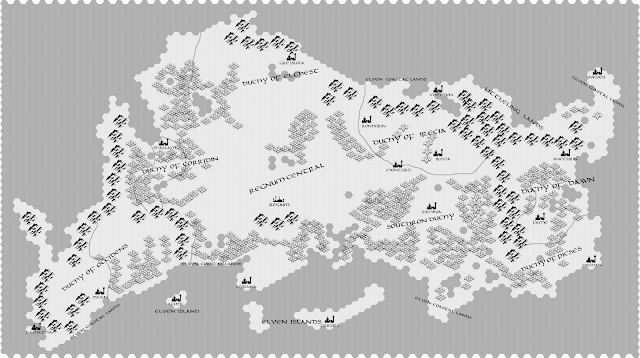