Back in the old blog, I posted a picture of the "Lands of Men" from my D&D campaign. 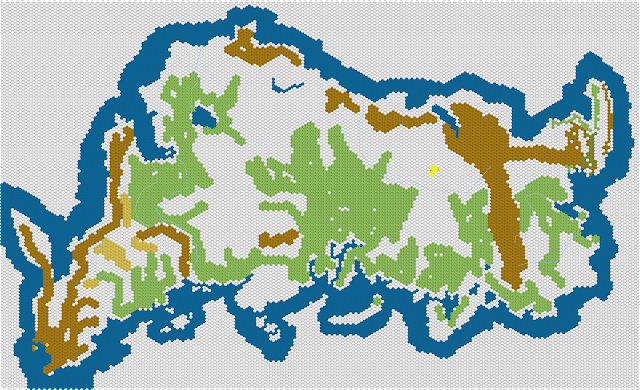 This continent is flargin huge. This landmass is roughly 220 hexes east/west at its widest breadth and roughly 100 hexes north/south at its tallest height. Each hex is the distance a man could walk in a day.

Now, see that little yellow area in the center right? That represents the area that the players had explored in about 2 years of play. That little yellow hex in the lower left? That's the one hex that my players have covered in the online game (that is going very nicely!)

Now fast forward to December 2015. Here's a WIP map of the "Lands of Men". It's changed even since then, but this is the last time I exported the entire map. 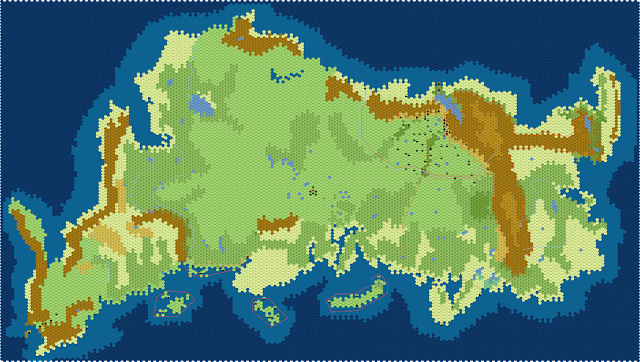 A lot has changed in what I've developed on this huge map. The terrain has been added for the entire world. I've started mapping out the political areas, especially with regards to where the elves and littlelings (hobbits) live. Elves, because they are sea-faring folk, live in coastal areas or islands. The nation of Littlelings is mainly in the north-east corner, although they are allowed to set up nomadic clan camps across the lands, by treaty with elves and humans.

The players in my tabletop game are still in that same rough area, but I've put them in a political entity known as the "Duchy of Irecia." I've just provided the players with a map of what lies in the Duchy. 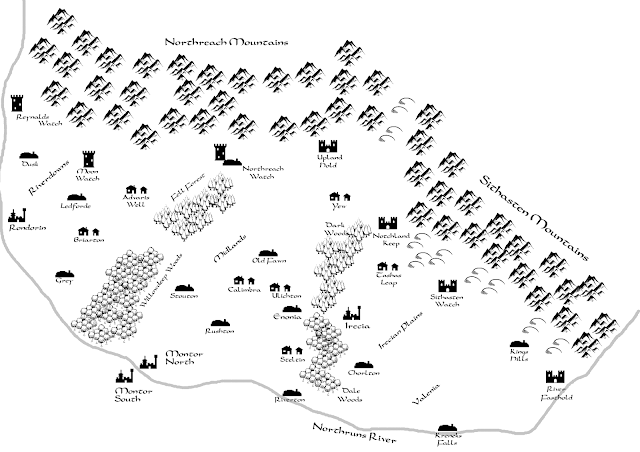 I should take a step back and explain why, after nearly 50 games, my players have explored the equivalent of 5 to 6 hexes. Part of that was due to how I ran the game in "West Marches" style and had put the more accessible places within a day or two travel of the players. Going further was nearly a death sentence. To the west of Enonia was boring kingdom. To the east of Enonia was the "frontier" but it was wild and whooly. Well, I've already written about how I had screwed up my campaign. It wasn't West Marches fault, I could have done a West Marches approach with them going ten days out instead of two. No, I made the campaign a grind.

Well, not anymore. As one player just wrote in our email list: "My there is so much more to explore :)"

Oh hell yea, there is. I have no doubt that I've opened the door to players wanting to go to the twin cities of Mentor, that they might be curious what's happening to Upland Hold and whether they should go see what happened to Sithasten Watch. They might get summoned by the Duke to Rondorin. And... if things get really interesting, I hope they make it to the Central Kingdom (which I haven't even named yet, since I do Just-In-Time mapping/keying/writing) and visit the King's City.

Lord help me if they travel to Skalfier, that little place on the opposite end of the continent...

The real jist of this post is that I feel like I crossed a threshold with putting names, words and thoughts to these areas. We've managed to have some pretty cool drama in 6 hexes, 2 days travel. Now I'm curious to see where they go next.

The other thing is that I've been slowly working towards understanding the political entities in my world... so that I can do the mass combat/wargames thing. I want to know what is going on all over and my goal for 2016 is to figure that out. This might not be Hyboria, but it's going to be MY Hyboria.
Labels: Chronicles of Etinerra campaign D&D dark ages campaign wargames