Second session of the Black Maw in the books. A room was lit on fire. A strange pool avoided. Pranks are being played on the PCs. And they fell victim to one of the classic Grimtooth setups - the room that may have an obvious trap and a hidden trap that will get someone eventually. Great game!

Five adventurers again braving the mysteries - one new player and one absent player. This week, we had:

Last week, the party had just opened the door to a circular room with a pool in the middle. This after being told by both graffiti and the wandering peddler "Don't Drink The Water!"
Of course, the party had to poke around the pool. Near it, the temperature dropped considerably, to where they could see their breath in the air. After trying to toss coins into it (they floated above the black, still surface) and then dipping Caius's wine glass into it to retrieve some black liquid, they began hearing a DEEP VOICE in their heads promising power, fortune, all sorts of good things if they would "Drink Me."

They decided to not do so and instead investigated the door to the south. It resisted their efforts to open it, but after some pulling and leverage with a spear in the door ring, it finally opened.
That led to a room with three doors that wouldn't open, although they heard strange voices and babbling behind one of the two doors at the bottom. Whatever was behind there refused to open the door, even after Brog beat on it with his axe. (Ed: earning an out-of-turn wandering monster check, which came up empty.)
They backtracked and headed down the passageway tangent to the circular pool room. It beckoned to them again as they passed by, but they again refused temptation.
Making their way through a room that seemed to be a garbage dump, they found themselves next in a large, cross-shaped chamber. This seemed to be some sort of living quarters, evidenced by the garbage piled around and the large stacks of furs/cloth/burlap that resembled tall beds.
Then a different voice started whispering to Caius in his ear to "drink the water. It'll give you power beyond belief!" The voice was different than the voice in the pool room. After a bit of poking around, suddenly Erwin's wineskin sprung a leak! Something had poked a hole in it. Caius decided to use a torch to set fire to one of the beds (Ed: Because what D&D party can resist setting fire to something?!) to try and smoke out whatever had done that to Erwin.

In the meantime, Bora managed to open a resistant door to another square room, one whose floor flagstones seemed especially well-trodden path around the perimeter. The rest of the party went to follow, as smoke from the smouldering bed made it difficult to stay in the cross-shaped room, but Caius's boot laces had been tied together and he fell face first, nearly smashing his wine glass! Fortunately, the glass was kept safe, but the water from the pool splashed out.
Cauis, angered by this, smashed a flask of oil on the burning bed and a conflagration started! Shut the door!
Now in the room with the strange path, the party surmised the center was a trap, although a test seemed to prove otherwise with nothing happening. They cautiously made their way along the perimeter, coming to a corner that was stained with splashed of a dried brown substance. The opposite corner had the same dire signs.
Stuck between two possible traps! Elmon poked his ten foot pole around and spears sprang from the floor and ceiling, confirming that the corners were dangerous. The elf then cautiously tap-tap-tapped his way across the center towards the door opposite, and nothing happened.
Erwin, figuring all was safe, followed in Elmon's footsteps and, of course, the pit trap opened and he dropped ten feet, suffering grievously from the fall![1] He was pulled out, first aid administered and the party proceeded to "hop" from one side near the dangerous corner to the other, thus avoiding both traps.
Just as the party prepared to leave the trap room, Elmon's sword belt and trousers fell down. Much hilarity ensued.
Opening the resistant door, the party made their way out of the trap room and down a passage to a T intersection with a door adjacent. With their torch sputtering low, the party pulled the door open to a strange room with large carvings of faces seemingly screaming in pain...

... and that's where we ended for the night!
SO! MUCH! FUN!
DM notes:
[1] Almost a fatality! Erwin has 5 hp. I had rolled a 4 for damage from the pit trap on my physical dice. I thought I would be "fair" and reroll so that the players saw the roll and results. The Discord Dice Maiden hates Erwin the Flamboyant and rolled a six!! So, being the kind DM that I am, I opted to use my physical roll. Fortunately, first aid could be applied, so Erwin is limping along with flesh wounds and 2 hp.
* What is up with the doors? Well, in this dungeon, the doors are resisting the players efforts to open them. It takes them awhile to open them, which burns up time, which consumes torches and prompts wandering monster checks.

* The trap room. This was a nasty room and one that reminded players that traps like this could happen. The path around the perimeter was a clue, as were the dried blood splashes in the corners where the spear traps were. There was indeed a hidden pit trap in the center. The challenge is to avoid both the corners and the center - hopping from one side to the other near the corners was an excellent approach! 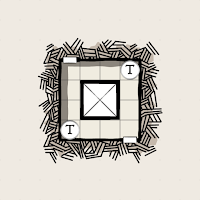 In OD&D, traps don't automatically go off when interacted with! The rules suggest "Traps are usually sprung by a roll or a 1 or a 2 when any character passes over or by them." (Vol III, pg 9) but I also have some traps more difficult to spring, or some traps that are easily activated. I also allow for the use of ten foot poles which act as a "character passing over/by" - they may warn a player. If players spend time examining an area, there's a chance they'll see a trap, depending on the trap and what they're doing. No guarantees, but I play it fair by how the players handle the situation and the nature of the trap itself.

* Fire! As the bed started to burn, smoke filled the room and adjacent open rooms, making it hard to see, and soon hard to breathe! The players beat feet quickly, but who knows what will happen with the fire as it burns while they explore? These are things I keep track of as the players interact with the dungeon.

... and there's the question of what is going with the cut wineskin, whispering voices, tying of shoe laces and pulling down of pants!?

* Describing the cross-shaped room was challenging - the players do not have a compass, so descriptions are "left, right, opposite, same, caddy-corner, adjacent" etc. They're not measuring out the rooms, so I give rough measurements at a guess. Despite that, the players have kept a fairly good map going, so I think we're learning each others' language in how to describe things.

* Time passage - again, ten minutes of actual time equals a turn, unless something is done mechanically that consumes time. Like applying first aid, exploring a room, examining for secrets, etc. There is some nervousness that torches are being consumed and they've not found coin yet to be able to replace them in town!