Two Fridays ago, I posted an "Ask Me Anything" on various social media about my Etinerra homebrew campaign. I got some really great questions, including from existing/former players. There were a couple of questions that I had to come up with on the fly, which was the fun part of the exercise.

There used to be a Mage's Guild, but then came the Shriving of 1145, when Chaos aligned Mages fought against Law aligned Mages. In the ensuing battle, the Kingdom and Duchies outlawed both factions. About 20 years later, the Doom happened.

Since then, mages have been looked upon with great suspicion. With the retreat of civilization, magic and mages are feared and loathed, or just tolerated. The more powerful have allied themselves with rulers for protection, or become hermits.

Currently, there seems to be a group called the Veridis Verde who have hunted lawful or neutral PC/NPC mages, attempting to bully/seduce them into aligning again with Chaos.

And there is a group called the Flames that have reached out to the more powerful PC mages, who are fighting Chaos and attempting to stop the Dark Ones from retaking all the lands and enslave the inhabitants.

GREAT question! It's actually the source of a mistake I made early on, then corrected, because I was shooting for Alexis Tao of D&D reality, and that's not really what I have fun with.

At first, I was going to push a lot more racial tension between the races, but in play, it didn't feel right and it wasn't something folks wanted to explore. So I pretty quickly threw out the heavy overtones, but left in some of the distrust that humans have for the other races.

Humans:
- Always been suspicious of littlelings (halflings) as thieves and liars
- Friendly enough with elves, although recent attacks by strange groups of elves from the sea are changing that to suspicion
- Hatred of Bestials (orcs, goblins, kobolds)

Littlelings (Halflings):
- Tolerant of humans, although annoyed/insulted at how humans feel about them. They live very nomadic, clannish lives.
- Enjoy the elves, although not too sure they trust elvish focus on seas

Elves:
- Tolerant of humans and littlelings, they see the former as slightly insane with the focus on 'religions' and 'gods'.
- Hate bestials

One of my players added (to elves):  In my mind, Belaldur rationalizes it as just a different kind of magic humans have tapped into; they do the pageantry and call it "miracles" just to help them focus. But that's just a sailor's opinion...

And that's pretty close to how I see/play it as well.

Dwarfs used to be the overseers and servants of the Dark Ones. They haven't been seen for several generations. Dwarfs joined the rebellion by humans/elves/littlelings and were key in defeating the Dark Ones. They felt guilty after. They stuck to woods and hills, in their farms, moved around. Then... gone.

Goblins revel in dishonesty, chaos, and mining/digging deep. They see humans as cattle to be enslaved/sold/used

Kobolds - Are beat up by everyone, they just want to eat.

There are other monster races, like dragons, giants, Chaos/Dark Ones, demons, and others to be found...

Yes, they have! Eastern Borders (tabletop) and Southern Seas (PbP) PCs have both affected the world in profound ways. Western Borders (online) are affecting the local area, as they grow in power and influence, they'll have greater effect, I'm sure.

This is something I've mentioned before in my blog and podcast - EVERYTHING impacts my campaign. Every game I play, whether RPG or wargames, if it's based in Etinerra, it has an impact. What's really cool is to see wargames impact tabletop/RPG and vice versa.

What a fun question, and something I had to come up with on the fly...

Well, there've been flying wizard towers, so assuming you knew a powerful mage, you'd gather the materials (everyone knows that nearest large town has a Merchant's Guild hall where anything can be bought if one has coin...), build the craft and get the mage to presto-zappo!

This is now going to become a thing in one of my campaigns, just not sure which one yet... I appreciate the inspiration! 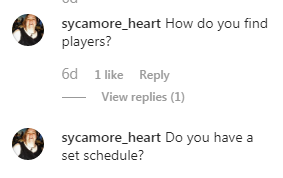 I find players by doing a lot of outreach! On reddit, on Facebook, at events, word of mouth, playing at game stores so people see. I'm always inviting folks to come play.

For my play by post game, I try to post 1x/day. For my online (Roll20/Discord) game, we play every other Tues 7pm CST. For my tabletop, we meet ~1x/month to every six weeks. Each one of those goes through slow times and boom times.

That's a hard one. I personally just push through it, trying to find "sparks" that help keep me excited. Like painting minis, or playing wargames or doing something new for myself in the world. This series of AMAs has gotten my imagination and excitement revving again! 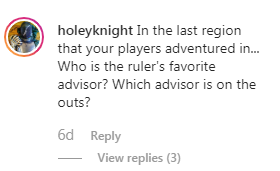 Right now, my tabletop players are knee deep in the ruins of a former outpost of the Dark Ones. It's called Tuluk. So nobody there as a ruler accessible to the players, per se.

However, they previously were at a place called Whiterun Fort, which is commanded by Marshall Lacheck. She has been there for many years and is capable commander, extremely loyal to the Southron Duchy,

Her favorite advisor is her 2nd, Major Shephord. He's young, impulsive, aggressive, eager and able to learn, despite himself - reminding her of her own youth.

Marshal Lacheck recently had problems with a Lieutenant Offgill. Offgill is the daughter of a noble family from the coastal port city of Orleans. Offgill despises this outpost and has begun keeping company with a band of Southron Irregulars who support the rebellion in the Duchy of Irecia to the north. Lacheck fears that much more rabble-rousing by Offgill will mean desertions of bored young soldiers itching for a fight.

Lacheck was previous generated for wargames use, but her 2nd and problem - all generated on the spot for this question.


And... that's it for the questions that my AMA generated. I had a ton of fun and hope this keeps up!