Last Friday, I posted an "Ask Me Anything" on various social media about my Etinerra homebrew campaign. I got some really great questions, including from existing/former players. There were a couple of questions that I had to come up with on the fly, which was the fun part of the exercise.

I enjoyed it so much, I wanted to share those questions here... and ask for more! Make me work for free! It'll benefit my campaign and hopefully your questions will help you benefit YOUR campaign!

Philippe, aka ChattyDM from the late 'aughts, played in one of my OD&D/Swords & Wizardy con games. I believe it was a middle of the night D&D at GenCon in 2009. He played a cleric that had fallen into the sandtrap of a giant ant lion.

Desperate to survive, Philippe not only used an oil grenade, but he also opted to use the d30 rule from my game to calculate damage. IIRC, he rolled a 30, or something insanely close that obliterated the poor hungry antlion. A mushroom cloud was generated from that latern/oil flask combo, and thus the Church/Society of the Lantern was born.

The Society does exist in my Etinerra campaign, but nobody has found it yet!

Patrick was a long-time player in the early years of my campaign, and made quite a name for himself as Kjeld, the ass-kicking, ale-swilling cleric of Vanir, the first pagan god rediscovered in my campaign. Patrick helped to solidify a lot of how clerics can act in my campaign, and he's a smart player who helped make a fun table!

When Patrick moved away, he gave me permission to use Kjeld as an ongoing NPC. Since then, Kjeld has helped the other pagan religions to solidify their position and become more respected. Kjeld and the followers of Meesha were working together to make their own compound/village just north of Enonia. Kjeld is probably involved in the fight against a rebellion to the south as well, caused by religious zealots - the Lightbringers - who are also backed by a Marshal and a popular priestess/city ruler named Dame Oriolt .

He still kicks ass and drinks a lot!

When the players started back in 2009, the date in my game was the 56th year after The Doom - the world shaking cataclysm that has tossed civilization on its collective ass. However, having three different games has resulted in some progressing faster, some slower, which makes things challenging for me!

Right now, the tabletop game is in Winter of the 60th year. The online Roll20/Discord game is in Fall of the 59th year. And my long-running play by post game is in the 57th year.

This is one that I had to come with an answer for! I dug into some of my history notes and came up with the following -

Most Celebrated - Kelvar Elthest, the first Duke of Elthest. He became the first King of the united lands of Men in the 31st year after the overthrow of the Dark Ones. His deeds were great; he rescued countless settlements from ravening beasts left from the Dark Ones and he stood against those who sought to gain tyrranical power and control in the ruins of the rebellion. Unfortunately, his greatest battle was also his last; the combined armies of the six Duchies defeated the Bandit Kings in the 48th Year of Kings, but he was slain in the conflict.

Most Despised - Duke Oscar Felix's name is stained black with blood from the "Succession Wars" that he caused when he seized the throne of King of Men in 266YK. Those wars lasted 22 years and resulted in many deaths. Oscar was killed in battle by Duke Thomas Elthest, who became King Elthest IV.

Another great question by Patrick - There are two types of dragons in my campaign. Winged dragons, which are very rare and the most intelligent. There are also wingless dragons, which are called "wyrms." Wyrms are more common (although not like they can be found around every tree...) Some wyrms are intelligent, but the vast majority are med/low intelligence.

Wyrms are more likely to be subdued and used as mounts for cavalry. Lore on winged dragons hasn't been fleshed out much, but I have some ideas that they are remnants of the creation of the world. They are aloof for the most part, and willing to leave well enough alone unless annoyed enough (or hungry enough) to want to get involved with the civilized races.

There were, before the Doom, dozens of different deities, worshiped all over the Lands by humans. The deities worked through their clerics and avatars of themselves.

When the Doom fell, a hysteria swept the land against all those types of worship. From that, the religion known as "The Light" sprang up. The clerics of "The Light" preach that the only solution for the Doom is for Mankind to rise up and work together as a cooperative society, believing in themselves and what they can do. The clerics do indeed seem to be able to perform miracles just as the clerics of old could do.

However, there are those that still worship the old gods, now known as Pagan gods. They are not very well liked, in fact, tolerance for or intolerance against pagans has caused a rift in the Light and resulted in rebellion in one Duchy.

The Orcs are bent on a holy crusade against the civilized races due to the god they worship - Moloch. It isn't known if Moloch is real or not.

Elves and Littlelings think that these human religions are a sign of inherent madness in humans.

I always give the players the option of what they want to play within the structure of my world.


For my events, I always run adventures from my world. I bring a fist-full of pregen PCs and let them pick one from the deck.

I also don't dictate what the player group structure is - it depends on who shows up! This is supposed to encourage the players to talk to each other to plan on what they want to do/be and to help give them incentive to show up/get others to show up - it hasn't quite worked out that way. Sometimes we don't have a cleric, sometimes we're cleric heavy! Just depends on who's there at the game.

Wow, this post is already long enough, so I'll stop for now and share the Twitter/Instagram questions later.

So since it's Friday, let's (re)open the question queue. 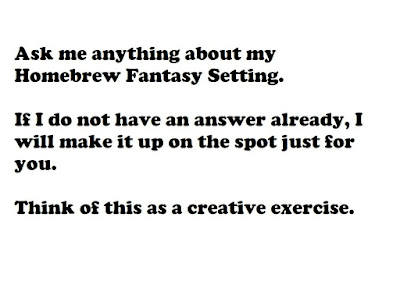