Infravision - part of the Mythic Underworld

A post by Talysman of "The Nine and Thirty Kingdoms" caught my eye this morning in my Feedly. "Infravision or Not" is his thoughts on the disconnect by some over infravision, and that in OD&D, monsters and some races in the dungeon could have it, but the same as PCs could not.

It was an interesting nit to pick, but his suggested resolution (make the monsters guaranteed "infravision" an aspect of blindness resulting in heightened senses) got me to thinking about a theme of older edition dungeons that I think gets forgotten... the idea that the dungeon itself is out to get you! 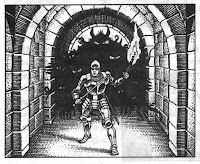 It's a concept I was first introduced to when I read Jason Cone/Philotomy's "Musings" on OD&D - a treasure of thoughts on how to play D&D in an old school fashion. The thought that the Underworld/dungeon as an entity that is opposed to you. Here's an excerpt:

There might be a reason the dungeon exists, but there might not; it might simply be. It certainly can, and perhaps should, be the centerpiece of the game. As for ecology, a megadungeon should have a certain amount of verisimilitude and internal consistency, but it is an underworld: a place where the normal laws of reality may not apply, and may be bent, warped, or broken. Not merely an underground site or a lair, not sane, the underworld gnaws on the physical world like some chaotic cancer. It is inimical to men; the dungeon, itself, opposes and obstructs the adventurers brave enough to explore it.

(This link takes you to the section of Philotomy's writings on the Underworld, it's worth a few minutes to read it!)

It's a concept that has stuck with me all these years. Doors that actively resist you opening them, forcing you to exert time and noise to open, while closing behind you and allowing dungeon monsters to use them with ease. An atmosphere that you (the PCs) don't belong here. That things aren't what they should be, and that you as invaders should be worried about the defenses. Rules and laws of the Above aren't going to apply to the Below.

For me, it makes complete sense that monsters/races in the dungeon would have innate infravision, and that OD&D races may lose those abilities once they become PCs. After all, those who join the party have now become traitors to the Underworld. And it remembers. That treachery will gnaw at it like a bit of bad beef in the stomach, and it cannot permit life to those who would align themselves with the invaders.

I've found that when I think of the dungeon in this way, all sorts of possibilities open up, and the odd things that D&D may incorporate into its rules suddenly become useful and even logical in such an illogical place.

What do you think? How does your dungeon come alive and break the "rules"?
Labels: D&D