Wraiths in my campaign

From a comment that I made on a post in the Old School Gamers Facebook group... decided to make a post out of it. My players have run into these enough that they've gotten the gist of how my undead roll.

Wights are "Greater Ghouls" in my campaign - with attribute drain as opposed to level drain. They have the same basic stats as the BtB wight. The attributes are either STR or CON - if the "to hit" is even, it's STR, if odd, it's CON. The effect wears off in 1d12 months. If a player drops to 0 in STR or CON, they die and will become a wight BtB.

What drove me to do this? Look at pictures of the two. 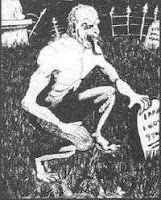 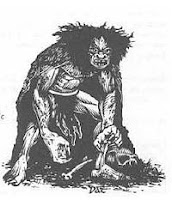 The wight has always screamed "BAMF ghoul" at me. I know a "ghast" monster exists and I'll use them as well, but in my campaign the wight is a lot more deadly (although its AC is still 5, as opposed to the ghast's AC of 4).

I also take cues from Tolkien and ghost stories... where terms like "ghosts", "wraiths" and "ghouls" were generic terms for a wide variety of creatures that were similar. And with the barrow wights in Tolkien, they just always struck me as ghoul-like - with corporate bodies.

We now come to wraiths and level drain. Now my vision of wraiths is 100% driven by Tolkien - and with level drains being the domain of wraiths (and vampires). It always bugged me that wights had this ability, and it made sense to me that, instead, there should be lesser versions of wraiths that could drain.
So in my campaign world, any sort of unembodied undead is called a "wraith" by conventional wisdom, though the sages, experienced priests and unlucky adventurers know the difference between "lesser wraiths" and "wraiths." From a mechanical perspective, lesser wraiths have similar stats to BtB wights in AC, HD, Move, and attacks, including 1 level drained. I have come to allow Save vs. Death (Poison/Paralysis) for those touched by a wraith, to resist the level drain (though they are out of combat for a few rounds due to the chill)

However, this doesn't nerf wraiths at all, because I've given both lesser and greater wraiths some extras.
Nasty creatures, and my players have wisely avoided them as much as possible, although one unfortunate player in my online/Rizzoma campaign has been drained by a lesser wraith, losing a level in the process. Similar to Frodo, he now "feels" undead when they are close, and there may be more as a result of that touch...

What do you think?