Tips for Improving My Minis Painting

I've been incrementally improving my painting over the last couple of hundred minis or so. A lot of them I've cranked out with the focus on tabletop quality. I've become comfortable with the Dallimore/Foundry base/highlight/highlight approach. I was in a bit of a rut, then I read an article titled "Painting Tactics for Solo Wargamers" from the Lone Warrior magazine.

The article is pretty simple, a bunch of techniques, but for me, they really changed the way I paint and the quality of what I'm doing. I'd like to share three of the tips that made the biggest difference. 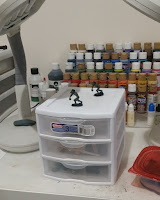 Tip 1 - Stability is the Key To Fine Lines (And general quality). I have electrician's shake, or so it was called when I was a young man and had it. It's a tremble that can be quite hard to overcome when you're painting eyeballs on little 15mm and 25mm figures. The idea of having something like a small box or crate to stabilize my hands and put the figures on, or rest my hands on while I'm holding up the mini close to my eyes was a HUGE improvement. Now I really can do eyeballs and iris's and fine lines!

Tip 2 - Fine Lines. I had never thought about the actual way I lay the paint down on the figure. With the tip about making series of fine lines, practicing them, approaching my strokes as a series of lines opened up a different way of looking at getting into those difficult places. How can I reduce those lines and folds to just lines? Instead of slopping paint around, now I found a new level of control simply by how I approached putting the paint on the figure. NOW it became apparent why paints should be thinned to the consistency of skim milk. It makes making those lines so much easier!

Tip 3 - The Case for using Pennies (or quarter sized washers). Up till now, I had been painting with figures mounted to pill bottle lids or two to three figures glued to a popsicle stick. It made it hard sometimes to really get a good angle to paint something. Reading this tip, with the "fuse" of crap paint, and being able to rotate that figure the way I needed it made sense, and I've discovered it doesn't really add any time to how I do my troops 1-2-3 in a row. For the larger figures, I use quarter sized washers with small holes in the center. Same principle, but it helps add to the quality (and in using the previous two tips) of the figure. For glue, I use Duco cement. I'm sure Aleen's Tacky Glue would work too.

All of the tips in this article are really good - Three Toed Sloth, Paint Away for instance, I really encourage you to take a look.

Now if I could just figure out the lighting in this new basement so I can get decent pics... I'm just doomed to have great looking figures and crappy photos.

Give the article a read and tell me what you think!  (PS. If you're reading this later and for whatever reason, the PDF isn't available, let me know! I'll send it to you or make it available.)
Labels: miniatures