The big move is complete and the new place is shaping up really nicely. ThePrincessWife and I call this our Dream Home because it really is. I mean, look at this space I now have for gaming! 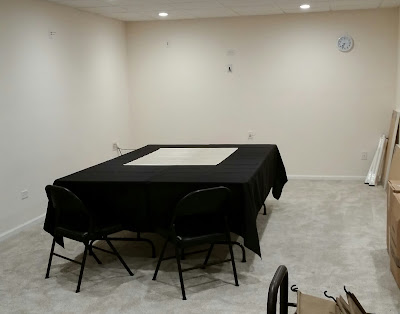 I have been thinking about how to start an additional game in my campaign world. I'd always mused about having a second tabletop game at a game store or library, a more open affair ran somewhat like my marathon games - drop in/drop out. I'd read how other DMs have ran games at libraries or schools, so I reached out to my new local library. They have a Board Game event regularly, so I contacted the organizer. I wasn't sure what to expect and I was really surprised to hear such a positive response! The organizer spoke of how folks came in asking if there was a D&D game, and even he himself wanted to play.

So this past Tuesday, I went over there and had a great talk with him. Even had two pre-teen boys with a 5e PHB walk up, all excited to hear that I am going to run a game. Of course, they had to tell me all about their characters. I love that enthusiasm! My first session will be end of July - so I have a little time to prep... and learn a new version of D&D. Yep, that's right - I'm going to run 5e. Basic 5e - and probably a few tweaks towards the way I prefer to run games, but 5e all the same. Why, you might ask? Well, because right now, 5e is the most available version, and if I'm going to attract people to my D&D table, the bar is lower to get them to join if I'm using the latest version. Something they've heard of and might be more inclined to participate regularly if I'm using something current.

I've got some ideas, blog posts and my own ongoing observations of how to make 5e feel like the D&D that I'm used to playing. I think it's going to be just fine. Who knows, I might lure some of them to my regular AD&D/OD&D game. If not, that's OK too... it'll be another group, having fun in my campaign world and exploring the story I've set. At the end of the day, the version matters less to me than the setting and the way we flow.

I can't wait. When I've run my marathon games, it's the kids who usually have the most fun, crazy ideas of what they want to do. I love that energy and I see myself 40 years ago, 11 years old and excitedly running around with my Holmes Blue book or AD&D PHB, wanting to play a game.
Labels: Chronicles of Etinerra campaign D&D dark ages campaign