I'm not one who is much for hero worship, unless they're an astronaut, deep sea explorer or they've written something that has inspired my life. I do, however, enjoy playing games with the older folks. They play like I play, and I learn a lot from their approach.

So when GaryCon event registration rolled around, I had a Featured Event Ticket burning my pocket, and I found Tim Kask's OD&D Featured Event had openings. That should have been my first warning, but I was all "Cool, man, I'll get to play with the first employee of TSR and he's probably got some interesting shit to show me."  I had never played with him before and I hadn't heard anyone say anything one way or another, so I was pretty open minded when I got to "The Button Bay" conference room on Saturday afternoon. 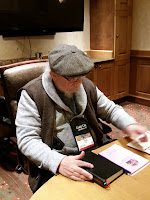 So in rolls Tim on his scooter and he's got some coil bound books. The table was filled with seven other players. Tim tosses out some char sheets on the table and shows us this pretty damn sweet, leather-bound OD&D book that has all the printings in one cover. He's got some cleric and magic user spell lists/explanations as separate booklets (GREAT IDEA!) and he begins thumbing through some modules, chuckling about how he's going to kill us.

Tim says "You guys should start getting to know each other and your abilities. You're going to need to know them." Nobody else caught that hint, or was willing to speak up, so me being the dumb idiot, I spoke up and described my character. I had a Superhero with a few nice magical baubles - Girdle of Speed, Potion of Haste, some healing potions and a nice magical iron spear. My character was very strong. Others chimed in and found out that we had a couple of Superheroes, clerics, a dwarf, Shorty the halfling and an Elf Lord-dandy, played by Scott Wampler, Jim Wampler's brother.

Now right away, I'm catching that Tim runs a very tight ship at his table. You ask your question and you shut the fuck up and let him think of an answer, or he lets you know it. So, as someone with Aspergers and the learned social program of "Chameleon", I quickly grok to treat Tim like a Commanding Officer. Don't bug him unless you want unwanted attention, you have a great idea or he tells you he wants you to open your fat trap.

He selects a scenario with a chuckle of "Oh, this is a fun one to kill you all with" and we set out to some tomb in a desert that was recently revealed. We entered and Tim described the first room as "Well built, finely carved stone" and some exits and - most importantly - "there is absolutely nothing else in this room."

And that's when TIM FUCKING KASK showed up.

Side track here for just a minute. I mentioned before that I like playing with the older players because of their style. In my experience, there is a big difference in the approach of how folks play D&D based on what version they play. Now, I know.. edition wars and blahblahfuckblah, but to me, I can usually pick out someone who has played primarily 3.5 and newer versus someone who mainly sticks to the old versions. I wish I could quantify it and if I wanted to write a thousand words, I could. But let's just say for the sake of argument that there are some differences. And that difference started showing up the moment we entered the dungeon.

A cleric of Saint Cuthbert and Shorty-the-halfling-thief wanted to do a search of the initial room. A thorough search, including rolling dice and examining each brick. But TIM FUCKING KASK wasn't going to play that game.

Tim: "I told you, there is nothing there."
Cleric (or maybe Halfling): "Yea, OK, but I want to see if there are traps and..."
Tim (interrupting): "Look. This is a convention game. We don't have time for doing things that might matter for your home campaign game. I will tell you if there is something you need to pay attention to. If I say the room is empty, the room is EMPTY!"

An uneasy silence fell for just a moment because Tim was pretty damn direct and short and getting the point across. Commanding officer style. I could see that there were a couple of players that really weren't getting this style of DMing.

We get to exploring this tomb. Tim is a hip-hop Dungeon Master, spitting out room descriptions and exits almost like rhymes, with clarity and quickness... and you best keep up! He expected us to believe him when he said "Nothing is in the room" and get to moving. This is when I grokked that Scott has played in Tim's games before, he's mapping quickly and efficiently. Cuthbert-Cleric, not so much, he was having a hard time with it. TIM FUCKING KASK wasn't stopping for you to fix your map, figure it out and move! 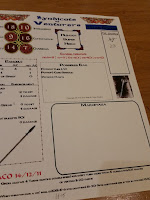 Between Scott and myself, we developed a rhythm going in update the map, pick a direction, send Shorty up ahead to open the doors. Then we found "The Tube." Floating in mid-air, magic all around. So me being me, I toss a sling bullet at it. ZAP! Now I'm compelled to get it, despite that it was obviously trapped and I get nailed by 5 huge crossbow bolts, erasing half my hp. MEDIC! Nobody else wanted to feel my pain, so we left... except I really wanted that tube! (Compelled, you know... it was some fun RP.) Tim chuckled at my misfortune and we moved on.

After that, it was about 30 minutes of poking around. Everyone was starting to click with things, and it seemed like the initial roughness of the session was wearing off... and then we got to the back half of the dungeon, where the clash of the generations happened... but that is for next the part!
Labels: D&D GaryCon