The players in my campaign have discovered a way for Marshall Roehm (the local noble in my campaign) to retake a key strategic position away from the orcs. There is a wooden earthworks fort guarded by a palisade with two gates roughly a day's walk away. It likes in woods, being the site of an old Inn.

We have about 6 weeks until the next game, which gives me plenty of time to plan and strategize, but I'm always interesting in learning new tactics and tricks, so I thought I would share the situation with you folks, my readers, and see what you think.

Here's the layout of the earthworks and surrounding area: 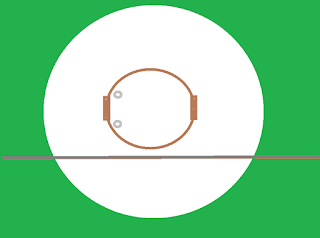 The green is the surrounding forest. The gray line represents the former road, overgrown in the woods. The brown represents about a 100 yard diameter area where the Inn used to be and is now enclosed in a wood palisade. Two gates - one to the east (the direction of the main Orc army), one to the west, facing the direction of the human town, Enonia. The white is a cleared out area of about 100 yards from the palisade to the woods edge. The orcs felled trees to construct the palisade and provide an area to see around.

The grey circles are two crude "towers", little more than the rubble of the inn piled up, with wooden platforms on top. These are manned by 1 to 2 orcs as lookouts watching to the west. The gates are fairly robust, as is the palisade itself - the walls of the earthworks look as below. 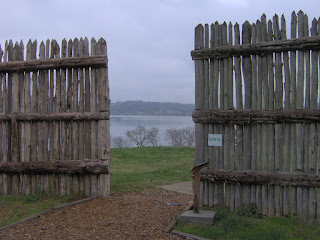 Here's what the humans know:
The noble would like the adventurers to sneak inside and blow the western gate open. He believes that when he shows up in force, the orcs will probably send the cavalry out the eastern gate and sweep around on both sides to attack. ("At least, that is what I would do!" he says.)

So... armchair wargame generals... here's your chance to influence my campaign. To be the Marshall and inject some randomness and unpredictability into the campaign. I know what the orcs' response will most likely be, but I'd like the human plans to be unpredictable.

How would YOU have the Marshall prosecute the battle from the side of the humans? How would you use your forces to give the adventurers enough time to blow open the gates (one of the PC mages pretty much sold his soul for fireball scrolls) and then be able to crash into the fort? How would you factor in the orcs cavalry and unknown size? The fact that orcs are not stupid, but extremely cunning, willing to fight to the death in many situations and completely committed to the annihilation of the human race, so that this will be a difficult battle?

Ask me questions (I'll put answers in the post as edits for future readers) and let me know what you think!

As an aside, I'm going to be mixing 1:1 D&D standard combat with Delta's Book of War for the mass-combat portions, when we have this fight on the tabletop in November... and I will have the palisade in miniature!

Edited to add:
1. In my campaign, orcs and goblyns are not affected by sunlight.