... or "How I resurrected a spreadsheet written by a player in 2011 and updated it for a homebrew calendar and pricing model"

Anyway, the players in my biweekly online AD&D/1e game wanted to investigate hiring on some muscle for their coming adventures -- hunting down a bloodthirsty ogre gang, possibly delving into some forgotten ruins, you know... typical D&D stuff.

Well, how much would it cost to hire on muscle? 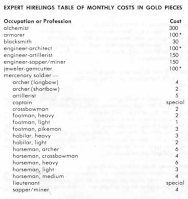 OD&D didn't really spell it out all that much, leaving it more to an exercise to the DM who might have some wargaming chops to know a bit about their campaign world and its economy. AD&D/1e, however, spelled it out in the DMG - see pgs 29 - 31.

This is all well and good, if you're playing in Gary Gygax's Greyhawk campaign. Those prices make sense for him. However, not so much for me, with my homebrew campaign and economy.

So how much does it cost to hire on muscle in MY world?

To figure that out, I needed to go back to basics in my economy, and use the DMG as a starting point for figuring that out.

Through trial and error, calculation and adjustment, I established a long time ago that the average joe laborer makes 175 gold crowns in my campaign. That's enough to feed himself (and perhaps his family, with some supplementing from a personal garden) and supply basic needs. This, then, forms the basis of how I'm going to calculate for my mercs.

(I thought I had an old blog post or two on how I cranked out my economy, but I can't find it via Google -- and TBH, that was a decade ago, I don't remember! I do know that I used a lot of the theory that Alexis/Tao of D&D used for their economy, so you can go down that rabbit hole if you like...)

That table above, from the DMG pg 29, is the key to making this whole thing work. If you look at it, you see that a "footman, light" costs 1gp a month to hire (not counting equipment, food and any bonuses, etc., etc.). A "footman, heavy" costs 2gp. And so on...

This is where my experience with Chainmail and other wargames kicks in. A light footman is kinda a very basic troop, the kind of troop that would be made up by the working class, common folk. Like... a laborer!

So, this table can be used as a relative scale. A light footman is the base troop type. Everything else is n times a light foot. So all I need to do is figure out the daily cost of the light foot, and use the table to figure out the other types as base * scale.

In my campaign, there are 240 days in a year. The Etinerrian calendar is based on seasons - Spring, Summer, Autumn, Fall. So can't really do the months, have to start with a daily rate and calculate per season.

The other thing is that a soldier probably wants a wee bit more gold to risk their life than a laborer. While a conscript farmer type might qualify as a light foot in battle, that's probably not going to be comparable wage. So, I like round numbers, so I figured a basic light foot merc is going to earn 200 gold crowns a year. It's a modest 15% raise, but I figure it might be enough to tempt that young lad to put down their hoe and pick up a spear for coin.

So now we can scale that .83 gold for a light foot for other troop types. A heavy foot on the DMG table goes for 2 gold, so that means they are 2x the cost of a light foot. That makes logical sense to me, so in my world, a heavy footman would cost one gold crown, six silver crowns and six copper pennies (1.66).

So we have one part of the cost of mercenaries, but wait, there's more! PCs have to equip their mercs, and feed them - otherwise the mercs are going to cost a LOT more. Equipment is easy, I have a price list base on my economy  and on availability of items. With food - a basic/normal ration costs 2 silver coins a day.

So for my lowly light foot, being hired for the Spring season (45 days):

The PCs will end up paying half the season's wages up front, along with purchasing equipment and a week's worth of food, so figure the initial outlay would be approximately 47 gold.

So that's your answer, in Etinerra. Now you see why I use a spreadsheet! 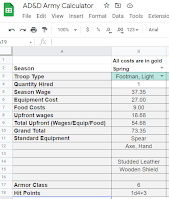 Now... if you're good with this, then rock on! However, if you're like me and an old wargaming type, then what about command structure? What about the cost of a full company of mercs? I could see rich/higher level PCs asking these questions, so I wanted to find out.

Soldiers need leaders, otherwise you have a complete mess of an armed mob. That command structure that the DMG shows consists of sergeants, lieutenants and captains. While this may or may not be "accurate", it's good enough to work in my campaign, so I've stuck with it.

But how do I price them?

When I cranked through those numbers, that just did not make sense to me for my world. It's hard to see a lowly el-tee being worth 200 times the worth of a foot soldier. It was also hard to see a regular sergeant being 10x, although a good NCO is worth their weight in gold, so maybe... ?

I ended up with sergeants being 5x the cost of a foot soldier, and lts being 10x the cost. That "feels" right to me in my world and it's a starting point - subject to further fiddling.

So what about captains, who are 5th level fighters and are the COs of this merry band? I put them at 20x the cost of a soldier, figuring that since there's only one, they're probably going to make a fine amount of coin.

With that in mind, I came up with the following cost of hiring a mercenary company of 100 soldiers and leaders for spring:

Yep, that's 12,393 gold crowns to hire a company of muscle - including leaders - and equipping/feeding them.

And remember this is just for light foot - the most basic kind of troop. If you want to ramp up to heavy foot, or archers, etc... it's going to just go up from there. No wonder wars are expensive!

Now while this may seem indulgent, it does help me to understand and scale larger conflicts and even come up with a possible basis for taxation. The Marshall or Duke isn't going to pay for these troops out of their own pockets, 'natch...

So there you go. Question answered, at least for my world, based on the DMG, but extending it to my world.