I'm sure every DM has done this at some point or other - visualized a character from another form of media - TV, film, comics, online - to make their NPCs come alive.

If not, it's a really useful tool that I would recommend AND it's very relevant right now, for me, as I start to take tentative steps back into my world of Etinerra. 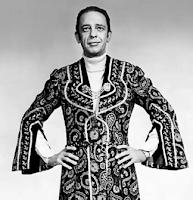 The PBP has been running by very, very, very slow drips over the last 2 years, as the pandemic and quarantining has played itself out. However, over the past couple of weeks, thanks in part to me getting my groove back in both my virtual "Western Borders" game and my "Southern Seas" game, I'm rediscovering my NPCs and how they act/think.
I know, that sounds so bad, right? Rediscovering my NPCs. I haven't been in their heads for awhile, though. Existential threats thanks to COVID kinda, sorta crowded everything else out.
Now, though, I have these pictures to remind me!
"Oh yea, Herm (the Don Knotts looking NPC) is a goofy, oddball, slightly/very crazy, but a heart of gold, loyal, and actually a fairly good fighter in his own right."
"Apinro (Skaara from Stargate movie/SG1 TV) - mischievous, can't speak Common as he's indigenous to the island of Ramathia, but he makes himself very well known... and he's a decent thief as well!"
"Claudia (Aethelflaed - Queen of Mercia - from Last Kingdom) is a young, strong (and strong-willed) woman who has chosen to follow a PC to seek a new life and a destiny that she feels within herself."
And so on...
I did this about 3 years ago, not realizing how important those pictures would be today.
I'm getting there. Bit by bit. Rediscovering that my world is kinda neat...
Labels: AD&D Chronicles of Etinerra campaign D&D OD&D