Addendum to Priests/esses of Mesha - dialing it back! 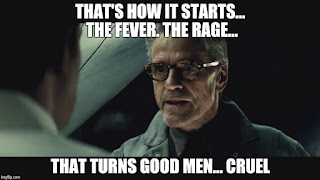 It's so easy, isn't it? A tweak here, a bonus there, a saving throw addition and now you have power creep.

That's what happened, I think, in the myriad and many options from sources like Dungeon magazine, Dragon magazine and Unearthed Arcana, plus the many options that inventive DMs came up with on their own. And before you know it, you have overpowered walking demi-gods in your game and you're wondering WTF just happened...?

In truth, subclasses should be be vehicles for player invention, roleplaying and identification. A priest from one god isn't going to be necessarily stronger than the other. What matters is deep down, what is real meaning of worshiping and wielding the power of that deity.

It's so easy to go nuts, and I did with the Priest/ess of Mesha. But... in looking back at them, I ask, what is really important? What makes that subclass so different that it needs to be called out? Focus on that one or two things and make small adjustments - enough to give the players something to work with, but make it subtle.

When I think about Mesha, her domain is the seasons and unpredictability. So, with that in mind, here's an update to the subclass from Saturday. This gives the setting flavor w/out making the subclass too much.

What do you think?

1. Qualifications: Alignment of neutral or chaotic, Wisdom of 9 or better, Charisma 9 or better

2. Class Abilities: Mesha's sphere of influence is the seasons and weather. She is capricious, but her chaotic nature is more about unpredictability than self-serving.

4. Roleplaying Guides:
a. The clerics of Mesha are just as unpredictable as their goddess. They revel in the change of the seasons and weather. Order and sameness are anathema to them, and they will seek to move on day after day, they will not willingly stay in the same place for more than 10 days (place being defined as same room, building, general locale. They must lay their heads down someplace different each tenday!

b. At the change of each season, they will celebrate with a feast, spending at least 100 gold coins per level (or all that they own, if less!) in as public of a place as possible. These celebrations are known for their unpredictability! (Note: For those DM's who use "carousing for XP" rules, this counts as a carouse!)
Labels: AD&D Chronicles of Etinerra campaign