How I introduce new or returning characters 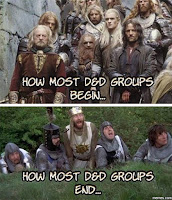 One thing that keeps a campaign going is new blood. Players move on, or life happens and they have to step away from the table, and you find replacements. Someone hears about your game and wants to come play! A player may miss a game or two and then return.

I hear of a lot of different approaches to this, with creative backstories or constructions on how player X just happened to be at the right place at the right time...

I saw situations like what this person described in one of the Facebook groups I'm a member of...

Two weeks? That's awful, to have a player sitting on their hands at the table. That must have been really hard for everyone there, especially player and DM. I would hate that!

I can't do do that, and I don't. I take a different tack.

I blame Jeff Rients for the approach I've used for the past ten years. A PC of mine died in one of his convention games. I rerolled 3d6 in order and he had me just hop back, no explanation, no story... just BAMF! and there I was. I loved it and stole it for my campaign game.

So, that's what I call my approach. BAMF'ing a PC into the game.

New character? Missed a game or two and you've come back? BAMF! You appear. Play on! That's it - no story or explanation of why someone appeared.

It avoids making people wait for that "perfect moment". It avoids contrived stories and excuses - we focus on making our stories in play going forward. It allows people to miss games, if life interferes, without some sort of handwaving that can be difficult to perform. Easy peasy.

It's definitely worked in all of my games. After a time or two, everyone got used to it and now most seem to prefer it that way. There are little jokes and "hey, where's Pickles" and that sort of thing, but it works.

Why BAMF? Well, it's not for Bad Assed Mother F***er... it's the sound Nightcrawler (Ed: Thanks for the correction!) makes when he teleports!

Give it a try! Let me know what you think in a comment below.

Have a tough situation that you're not sure BAMF'ing can help with? Ask me! I've had some crazy situations in my campaign over the years.
Labels: Chronicles of Etinerra campaign D&D