I just finished creating a set of 24 modular tiles that I can use to create battlefields that are underground or in the Underworld! I made them for wargames, Chaos Wars, specifically, but I could also easily use them for D&D play as well. This idea came from the Ral Partha Chaos Wars Campaign Book #8 - Clash of Runes & Bone. In it, there are rules for generating battlegrounds underground. 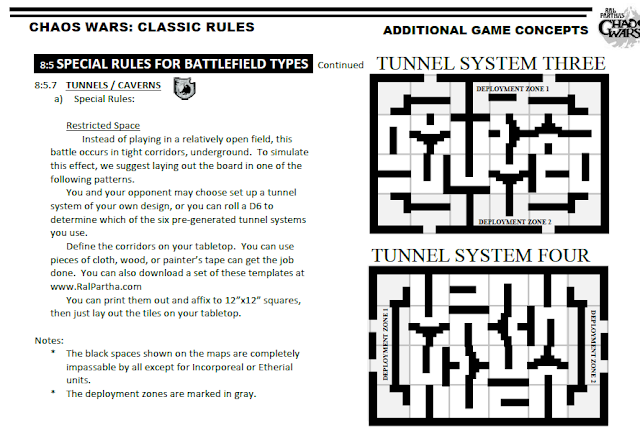 If you've read my blog, you know that I have a weird interest in taking armies underground. It's just a fascinating scenario to consider - the limitations on terrain, the change in tactics, the nasty hand-to-hand combat that would ensue.

So the terrain type out of the Chaos Wars book appealed to me. The fact that this was meant to be a modular approach by using downloadable tiles that could be printed tweaked the terrain builder in me. If the intent was to print these out and affix the prints to 12" x 12" tiles... why not make a 3D set of tiles? 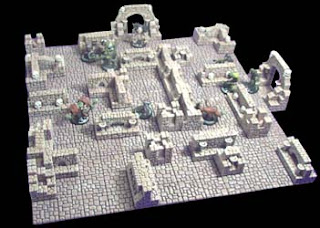 Unfortunately, both of these boards are significantly smaller than the 6 foot by 4 foot board that I need for Chaos Wars. Plus, the time investment for casting the blocks, prepping/painting would be significant.

Same for 3d printed walls - the time to print enough terrain on my lone Ender 3 would mean I'd probably be printing from now till 2020!

So I turned to the tried and true, plus FASTER method - vinyl tile flooring and pink insulation foam. I'm really pleased with the results! 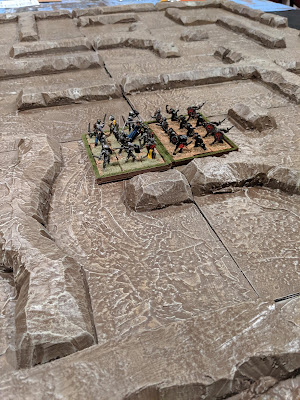 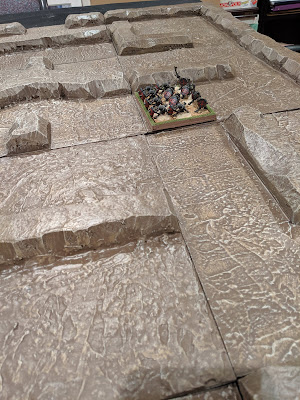 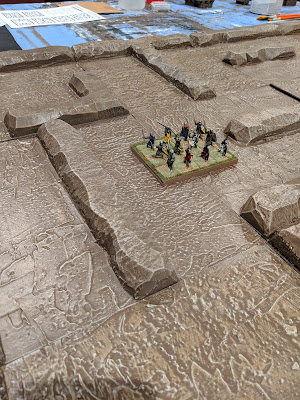 First, to get the dimensions right, I downloaded the tile set from ralpartha.com. To map them out on a grid, so I could get the dimensions correct, I imported the PDF into GIMP, scaled the images to 12" x 12" and placed (render tool) a 1" x 1" grid onto it. I printed out each sheet so that I could count boxes and ensure that my tiles would be laid out correctly. 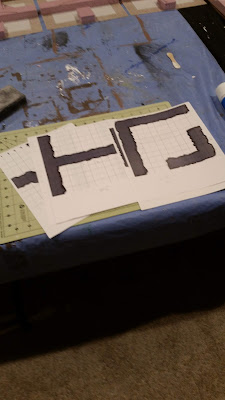 I rounded up supplies for construction:

Once I had my supplies, I began creating tiles! I cut up a bunch of 2" strips of the insulation foam, then cutting those strips into the proper lengths for each tile. Example below, for my 4 corner tiles, I cut 4x 12" strips, 4x 10" strips, 4x 6" strips, 4x 5" strips.

Before gluing them to the tiles, I took sandpaper to the tile's surface. I wanted to rough up the coating on the tile so that glue and paint could better bond to it.

Next step was a matter of gluing the insulation onto the tile and then letting it dry for 24 hours. 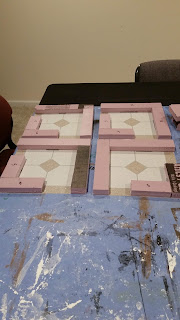 Once the glue had cured for 24 hours, I then did some surface prep to the foam. Cutting off corners, making notches and cracks to make it look rocklike, then taking some crumpled up aluminum foil and rolling that over the foam to break up the smooth surfaces. It might not show up much now, but when you dry brush paint over the surface, the irregularities will show up great! 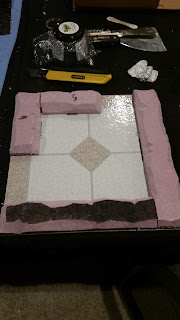 Next, to give the floor a bit of texture and a cavern-like appearance, I spread a thin layer of spackling (aka filler) across the tile surface, as well as filled in any gaps where the insulation strips joined together. I didn't try to make this perfectly smooth, I left in ridges, swirls and other features to make it look interesting, using my putty knife/dry wall knife. Again, a thin layer is all you need. The spackling should grip the roughed up surface just fine.

Here again, this took about 24 hours or so to dry. 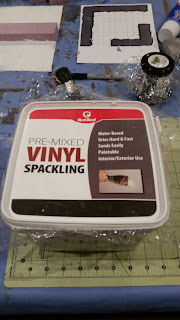 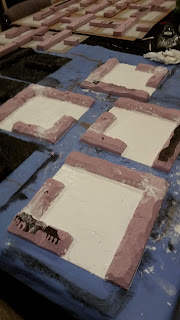 Once dried, I coated the tiles with what is known as the Black Magic Base Coat. A mix of Mod Podge and black paint, it helps to seal and protect the tiles as well as serve as a good base coat to paint over. I've linked to the video, so you can see it for yourselves. It's a good technique for most terrain pieces, give it a try! 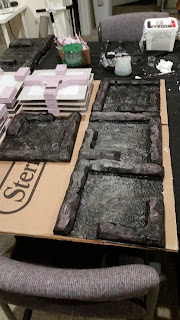 Once dried, then comes the painting! For this set, I used a color scheme from Hirst Arts used for their Fieldstone pieces. A basecoat of dark brown, a midtone drybrushed of a lighter orange-brown, and a highlight drybrushed of a cream white.

I used Walmart el-cheapo interior latex - it's a great, cheap paint that they'll tint to your desire and it holds up well under use. Far cheaper, in the long run, as opposed to hobby paints.

The basecoat took two coats to fully cover and provide a decent look. I let it dry and then continued on. 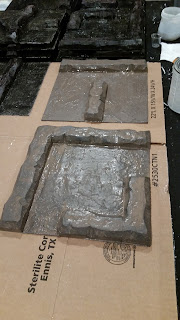 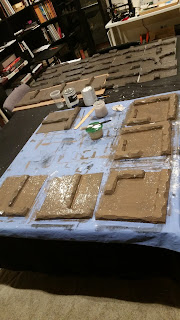 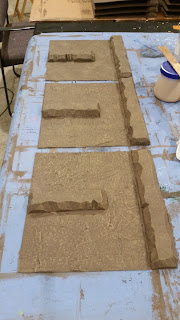 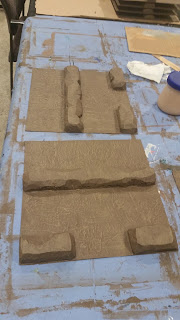 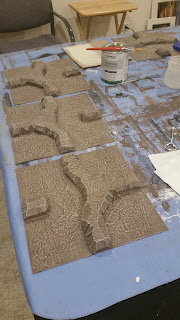 After that dried for 24 hours, I grabbed a spray can of matte sealer/varnish (matt clearcoat from Walmart, $3/can). That just provides a final bit of protection.

Now at this point, with the spray can, I noticed that some of the foam developed small bubbles. These are places where the solvents of the spray paint found places in the latex/Mod Podge skin to get through and melted the foam. To take care of these, I took a tiny needle and pricked the blister, then pushed the air out. It adds a bit of texture to the piece and I don't notice where the bubbles are once deflated.

And with that, after about four weeks of doing these on and off in the evenings, I have a full set of modular tiles, ready to create underground mazes for armies to do battle within! 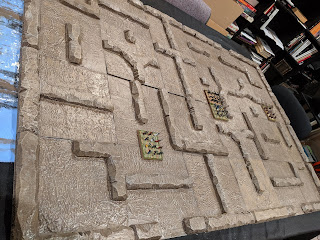 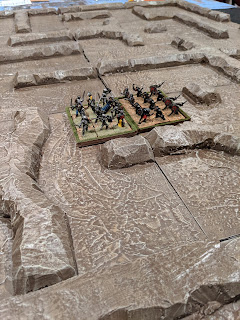 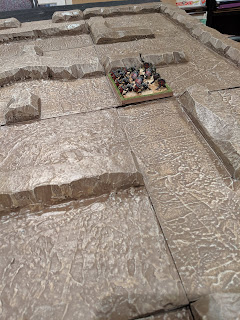 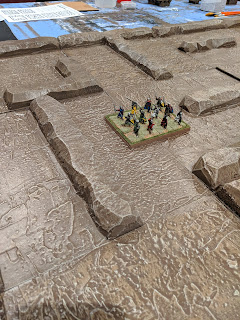 I'm probably going to store these in some totes or boxes. I will store them on edge, so that the weight of the tile doesn't cause a bit of bend if the corners are unsupported.

Now, I could have painted these a gray as well, and I did paint a tile in each color just to see which one I preferred. For this set, I went with the brown, but if gray dungeons are your thing, then that's an option too... I used the Hirst Arts Castle Grey scheme. There's also an interesting Water Cavern scheme, if that interests you as well. 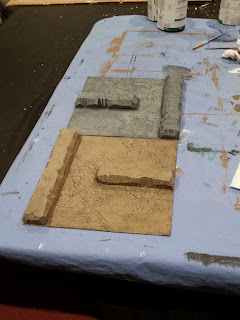 So, what do you think of my modular tiles for underground dungeons and mazes? Is this something you might try to do yourself? Give it a shot, it's a pretty easy build for all skill levels!
Labels: Chaos Wars DIY tutorial wargames