The poor, maligned goblin. First shown as some sort of a strange dwarf-like creature in 1974 D&D 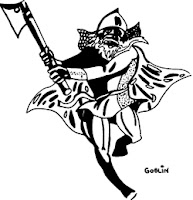 ... then reintroduced as a small, fierce but weak creature in 1st edition AD&D 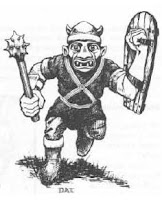 ... and shown to be blue/gray, bulbous and bullying in Rankin-Bass's "The Hobbit" movie. 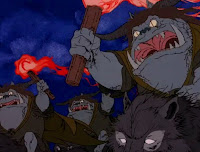 Goblins get about as much respect as do kobolds in old school games. They're seen like the proverbial rats in CRPG video games - a source of experience and treasure to get to the Cool Monsters! Who cares about stupid goblins?

Well, just as the players in the infamous Tucker's Kobolds story hate kobolds, my players now hate ChicagoWiz's little 1-1 HD goblins. In outdoor settings, they have become skirmishers with hit and fade tactics combining speed, stealth, numbers, arrows and oil/flame grenades. At least, that's all they showed in yesterday's game. Who knows what else they have up their little green sleeves?

My players decided to see what is going on at the Bestial (Orc/Goblin) captured city of Irecia. Up till now, the Orcs seemed to be engaging in attack and raid type of activities in the lands that the humans had fled. The players were told that an orc encampment was near an outpost, but the commander shared that no orc sign had been seen in days. He also mentioned offhand that the "goblins were the only thing we've seen" but said nothing else.

I could see it on my players' faces. "Goblins. Pfft. Whatevs."

So the players left to scout Irecia and check out this encampment along the way. They approached the position with the littleling (halfling) thief/druid leading the way, the elf fighter/thief following and the rest of the party behind.

The players took a couple of hits from arrows flying out of the grass at them, so they went pursuing short goblins through tall grass. Belly to chest high tall grass...

This didn't go well. The other goblins waiting fired at the players. Then they ran. The players couldn't get to them in time. One has a pet wolf that did kill one, but by then, the others had ran off.

Resources being used. Delays in the players advancing. This is exactly what skirmishers do.

Thinking they were done with annoying goblins, players explored the abandoned encampment and moved back to the road... straight into another ambush. This time, along with arrows came exploding oil grenades.

This time, a lot of hit points were chewed up and the flames caused more headaches, even to the AC0 paladin. You see, I use the Holmes "roll for 11" rule to get an oil grenade into a general area to cause splash damage. So the goblins didn't need to hit directly, just get the oil close enough.

This time, the players expended more resources - cure light wounds and sleep spells, and managed to get a few more of them. However, faced with the prospect of being harassed - on foot - by these goblins or going back to get the horses to risk them on the journey, the players opted for the horses. Back to the fort they went, to get their horses and once again, they faced the road leading east to Irecia.

Of course, this meant they had to run the gauntlet of the goblins waiting by the road.

Onwards they galloped, full speed, shot at with only a couple of hits!

For the rest of the game, the players explored, confronted orcs with slaves, the Paladin almost killed one of the Clerics with a fumbled shot, good times... and then, to return, the players had to run the gauntlet again to come back. They were not happy about this prospect. More hp lost as they galloped past again. After returning, the commander mentioned to them "Yea, we lose a man or two every time they run into goblins." I could see some amount of sympathy now on the players' faces.

Goblins are cunning and they learn...

Can you imagine what might be waiting for the players the next time they try this? 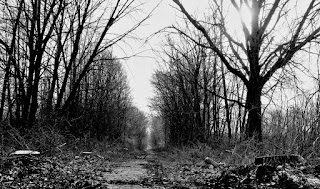 I've taken 1-1HD cannon fodder and made them into something now that the players will plan against and will take seriously. Sure, they can be slept, shot, chased down and eventually eliminated, but that comes with a price. Two henchmen were almost lost to these little buggers and spells were used. They could avoid them, which comes with its own price.