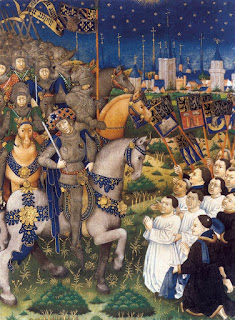 I love wargames and the little bits and pieces that the old school D&D games took from the wargame heritage. One of those is morale. The fact that hirelings can flee screaming, or the goblins that have been bedeviling the PCs finally can break due to losses is what makes the combat much more interesting, at least to me. I love the dice to tell a story.

I've thrown out a lot of what I see as the fiddlier aspects of AD&D, usually in favor of simpler rules to adjudicate.Lately, MORALE has been on my mind. I finally put to "paper" what I have cobbled together over the years. A good chunk of this comes from some OD&D Board discussion, with which I experimented with. And this is going to surprise some of the players to know that I have a secret stat for their hirelings and followers!

Henchmen/Hirelings have a 7th stat - Loyalty. Loyalty affects their morale checks if needed. This is based on the old OD&D Loyalty score:

I may also adjust based on their offer, treatment of their hirelings/henchmen, etc. But rather than use percentages, I use just +1 to +3 or -1 to -3.

Edited to add: So when do I check for loyalty? Usually when the PCs ask the NPCs to do something that would seriously jeopardize themselves, or they do something so out of character that it could break the fellowship!

I don't start off with a morale score and roll against that. What I use is similar to my reaction table, which is based on Moldvay's reaction table. I check morale on the first third of casualties, the second third of casualties and/or when, if I think of intelligent monsters as PCs, I'd be considering turning tail and running. I also may check morale of hirelings if the situation is dire, or the PCs do something that would really affect their loyalty.

The following morale adjustments can be made and these can be cumulative:
Stronger HD than party: +1
Stronger in numbers than party: +1
(Lesser means -1, for each of the above)
50% or more casualties: -2

If I'm checking hireling/henchmen morale, I apply the loyalty bonus to this roll, as well.

For the PC doing most of the talking, or seen by the monsters as "the PCs leader", I apply the following CHA adjustments.

Things like loyalty scores, I come up the values for the NPCs when needed, although I probably should start doing this up front. The important thing is that I don't let the players know! They can probably guess based on the hirelings/henchmen's actions, but there is always that doubt that makes for wonderful drama.

The plus/minuses being simpler and using 2d6 make it less fiddly for me.