Wow, time flies! It's been a month since I last posted, so WTH have I been up to?

There's a certain madness that happens when @thePrincessWife mentions moving or a real estate transaction. She's finally managed to convince me that we should move to a bigger home... and she used the lure of a dedicated gaming room to seal the deal. So our house of 13 years is being decluttered, painted and prepped for going on the market. That does cut down on my hobby time, and with GaryCon & Little Wars coming up, that's a lot to work on! Painting has continued during this time, just a lot more slowly than I would have liked.

But... last night, I dry fitted my City Towers/Gates together. I'm so happy  how it turned out. Forgive the crappy lighting, it's a lot brighter in good light. 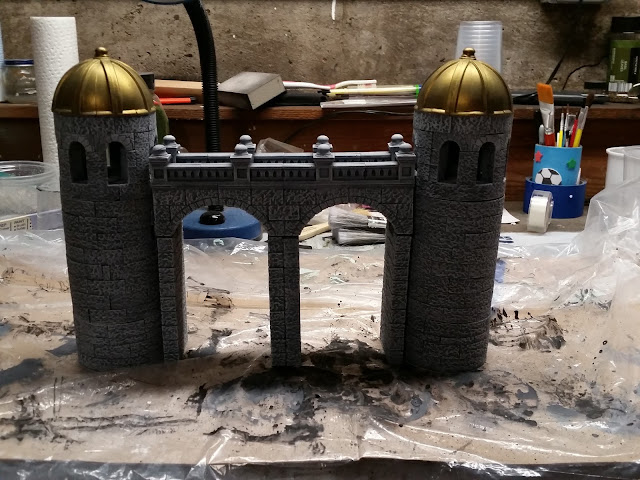 I have the gates to build and the highlights on the domes, and the actual gluing together, but I am very pleased with how it's turned out. I'm not going to stress (right now) on filling in the gap between the gate side supports and tower - that will come later (if ever).

Then I have two foam walls for either side, and the gates of Shallam are ready for battle!
Speaking of GaryCon... in planning for this adventure, and taking some great advice from Fight On #3 and some great articles on the web, I'm planning this adventure a bit different than a normal AD&D game. I'm going to use a pointcrawl approach. That fits in very well with how to pace and flow a convention game. It allows me to build in options for player choices.

It also removes a worry for me. In other con games, I've watched as players bog down into the minutiae of the 10' square and the mapping and the dungeons. I wanted to go through something different. These locations will have those things and if these locations were going to be explored over a series of games, I would prep that way.

This is four hours. I have an area that is unexplored by current players, and it's a huge area. If I'm going to pull this off right, I'd much rather have a tour of the highlights rather than a focus on 10x10 rooms and dusty halls with coppers in the corners. So... point crawl it is. Major places will be mapped, prepped and factions/NPCs/wandering creatures noted.

This gives me the best of both worlds and I'm feeling a lot less pressure in preparation than if I had to stock what is on the order of megadungeon size. The Dark Ones delved deep in their greed, and those empty pits and tunnels are many.

After the Con, I'll go over the tools I used to help prep - one of them dates back to old school times and was invaluable in preparation!