AD&D Experiment - Generate a dungeon at the table in play

I had a problem. I had no dungeon and my game started in 3 hours.

To be fair, April has been a shit month. We had to put our beloved dog Bear to sleep after 13 years, and that's had more of an effect on me than I had realized. So when it came game time for May, I had not prepared as much as I really needed.

In fact, I hadn't prepared at all. What was I going to do? The players had finally reached a major destination in story and journey - the ruins of Tuluk. A ruined temple complex of Chaos and the Dark Ones. Rumors of a sword artifact within that might help rid the world of the Dark Ones, rumors of the Orcs/Gobins rebuilding Tuluk for an "Angel of Moloch."

The initial levels accessible through outlying towers of the temple complex are a hodgepodge of tunnels and not very well maintained mines, access shafts - mazelike and not very easy to get through. It struck me that this is a perfect opportunity to use random dungeon generation. It was never going to be logical, so let the dice do the talking. 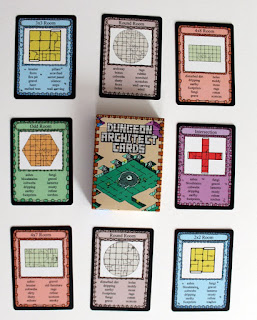 Thanks to one of my players, Richard Iorio of Rogue Games, I have a deck of Dungeon Architect Cards. I divided the deck into two piles, one of passageways, one of room shapes. The cards have a passageway on one side, room on the other, so I made the room shapes pile consist of the oddly shaped rooms, and the rest of the cards were flipped to passageways.

For the monster determination, I used the random monster charts from the 1st edition Monster Manual 2, keeping in mind that this was bestial infested, leftovers of chaos and evil and probably more critters and creatures than factions (for now).

For treasure, I printed out pages 160 and 161 from OSRIC to help determine treasure and give me any other inspirations on room contents (these pages are from the OSRIC random dungeon generator).

This process filled 4 fun hours of gaming! I was up front with the players on this approach and they were game. They ran into goblins and more goblins, who are busy digging through the tunnels on orders from the Orcs. They ran into an ochre jelly which beat up on the halfling thief. A giant toad which also beat up on the halfling thief. He was a popular target. And there was a group of skeletons that the cleric kept turning as they ran into them.

Doing it this way has given me some much needed time to start getting things together properly. At some point, they'll descend far enough, or run into a passage that takes them into a planned area. I'm working on that right now.

One of the best parts of having players who read my blog is that when I do post about interesting things, they'll engage and we'll have a really good talk.

The downside is that THEY READ MY BLOG and I can't talk about all the cool things that come to mind and I get all inspired for. This morning, I had an idea hit me out of the blue for a really interesting development in the dungeon. As much as I want to share my awesome idea (which has required me to hop on eBay and order a couple of minis...) I can't. *sigh*

Here's a hint to my awesome idea for a dungeon level or two...

Edited to add: Fuzzy helpfully pointed out that the cards are no longer available from the publisher's website nor DTRPG. No idea why, that's a shame!
Labels: Chronicles of Etinerra campaign D&D