It's been a long desire of mine to mix in any scale of combat into my D&D campaign, whether it be 1 on 1, skirmish level or huge armies level. Or even solo, to be able to resolve campaign world issues! I may have visions of Tony Bath's Hyboria in my head...

One of the requirements is that I find rule sets that are easy to teach and play and can reflect a wide variety of opponents and possibly include some magic into the mix. Not everyone in my campaign is a wargamer and I would like the experience to be fairly seamless and "feel" consistent.

The rules have been reviewed pretty extensively by other bloggers and even expanded for some serious playing (darkages40and25 blog, boardgamegeek.com and expanded approach in Wargame Miscellany blog). I've run a couple of solo games and found it quite enjoyable. Quick and dirty, and like any good game, it has a lot of ways to be tinkered and improved.

The one "fun" bit is looking at my stands of 15mm HOTT elements and my 25mm figures and trying to figure out how to base them for 1HW. HOTT has 40mm wide bases (for 15mm scale figures) and my 25mm are a mix of 3/4" and 1" widths. I had started with Battlesystem/Swords & Spells rules, but have since gone to Delta's Book of War basing. 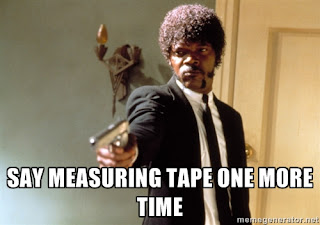 In 1HW, the approach is to be as simple and quick to play as you like. The playing board is recommended at 3' by 3', allowing someone to use a common dining room table or foldup card table, even. The unit sizes are set from 4" to 6" widths. No specifics on how many figures or what they should look like or depth... just the width. But...

4 to 6 inches!? How am I going to make this work with my bitty 40mm elements or 1 inch elements? So I did what any good wargamer does... 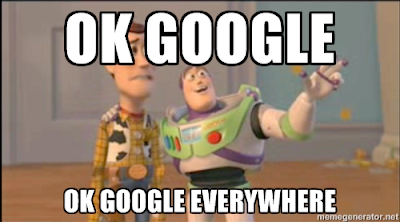 "OK, Google! How do I build homemade movement trays?"

Here's the WIP, based on this howto from the MiniWarGaming blog. 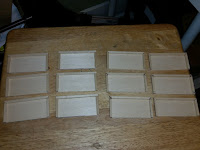 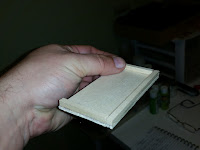 The ones on the right are my first attempt, which you can see how that turned out... the ones on the left look a lot better. I used basswood instead of balsa wood, since it's a bit harder material. I also opted to not use 45 angles at the corners, instead cutting a 3/16" extra off the side pieces. 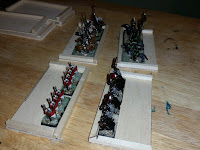 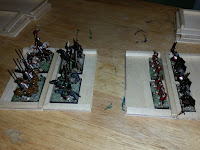 15mm HOTT elements with 40"mm widths. I opted to make 4" wide unit trays, which will hold two 40mm elements. This allows me to use what I have and be able to stage some games now, versus waiting to make more HOTT elements. I can easily make 6" wide trays later if I want (and have more figures to put in them). 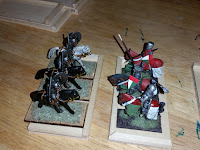 The 25mm elements work well too! I'm limited to 3 across, since the inside space is reduced a bit. It's nice to know I can mix and match the figure scale and still be able to conduct games.

Once I get these guys finished, I'll post the pictures.

And after a few more solo games to figure out which Era rules in 1HW fits, I'll start the tinkering. I'll need some sort of magic rules, fantastic monster rules... you know... the things! Because this is what brings my campaign alive for me... being able to make it live and breathe through both RPGing and wargaming.